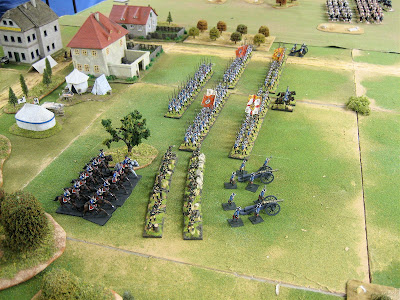 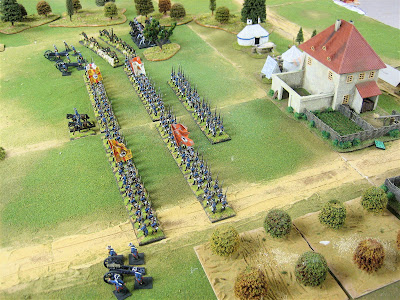 The whole brigade as seen from one of Monsieur Montgolfier's hot air balloons. 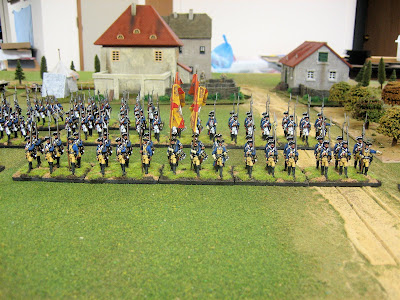 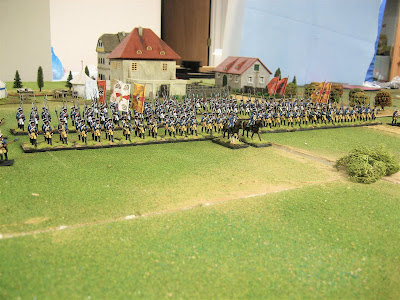 IR5 Alt Braunschweig in the front rank and IR1 Winterfeldt in the second line.


I finished the basing of the second battalion of IR5 Alt Braunschweig last evening and so I now have a nice brigade of Minden Prussians: 4 musketeer battalions, 1 grenadier battalion, 1 jager battalion, 3 artillery crews and 12 Bayreuth Dragoons. click on all of the pictures for a larger view of my Prussian brigade so far. 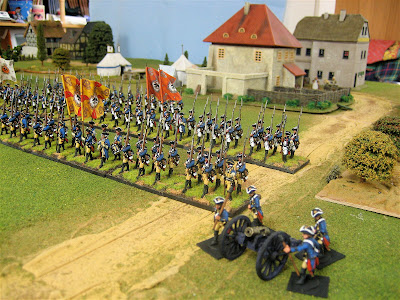 They look pretty nifty en masse, don't you think? I particularly like the effect of two flags per battalion and four for the entire regiment. The long ranks and the GMB Designs Flags really enhance the overall look of the brigade. The marching pose and the furling flags really seem to give the appearance of everything in motion.

Once April turns the corner, I will have to take a temporary time out from the Mindens and paint 24 Elite Miniatures SYW British Dragoon Guards for our BAR Fontenoy game at Little Wars, at the end of April. Then I will pick up the brushes again and paint IR13 Itzenplitz (2 btns), which would get me to the end of Phase I of my Prussian Minden army. I might switch over to Minden Austrians at that time and build them up to eight battalions. Then go back and forth between the two armies until I get 12 battalions and 4 cavalry regiments completed for each side. The goal is to have enough of an army to run a game at next year's SYW Association convention in March 2011.