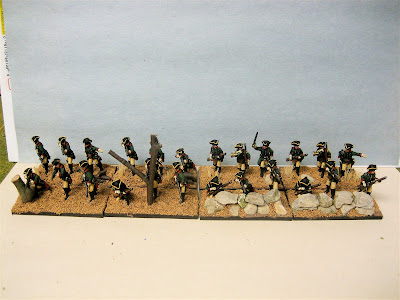 
I went on a painting blitz over the weekend and polished off a 24-figure unit of Minden Prussian Jagers. In all fairness though, at least 4 or 5 of them were samples that I had started on last week and so they were near completion. However, I don't count them as "almost completed", but rather they earn the rank of "completed" when the figures are actually done.

Let me say that I had a blast painting these Prussian jagers. The animation and sense of motion that the figures have really inspired me to keep my brushes moving in a record time. The range has 8 different figures: officer, NCO pointing, musician with horn, standing and kneeling firing, standing and kneeling loading or at the ready, and one standing advancing figure.

The posing of the figures stirs the creative juices too, when it comes to basing the finished figures for wargame use. The two kneeling figures (firing and loading) are naturals for placing behind some cover. The standing firing figure can also be based with his rifle resting on some object for support, in the case below, a tree branch. 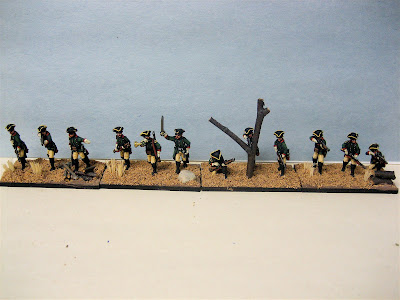 I cut up some twigs that I found in the front yard and sawed three pieces into small miniature logs, which I piled up and glued together with super glue. I placed a jager kneeling/firing behind this log pile. The standing/firing jager was placed behind a tree, again made from a twig from the yard. I measure the distance of the figure where his rifle rested on the crook of the tree and sawed off the twig to measure. Then, I filed the bottom of the twig flat and drilled a hole in the twig and inserted a metal pin (from a left over piece of a North Star metal spear that I had saved in my "bits box"). I then sank another drill hole into the base of the stand. This provides the tree with extra strength so that it can survive any rough handling. The metal pin connects the twig to the MDF wooden base for more support. 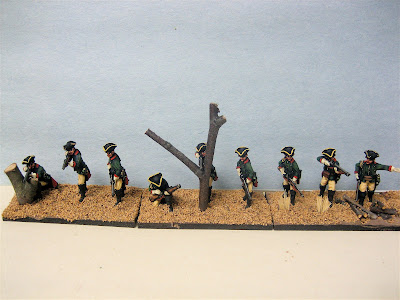 A close up view of the "twig group" of figures. I like the jager kneeling behind the tree stump (click pix to enlarge),

For basing, I used a piece of precut MDF board from a company called Georgo Bases. The dimension used was 60mm by 30mm deep. This is just right for placing three of the Minden jagers and still having some room left for mini-diorama building on the base. The 60mm frontage also corresponds to the frontage of my "formed battalions" which measure 60mm by 40mm, as recommended in the Black Powder rules. I went back and forth over the idea of using 2 figures on a smaller base or 3 figures on a bigger base. In the end, I liked the idea of "open order" troops having the same frontage as line troops, but less depth and fewer figures (3 instead of 6 formed figures). Thus the frontages match up, but at a glance I can easily tell if the unit is formed or able to skirmish or operate in loose, open order. 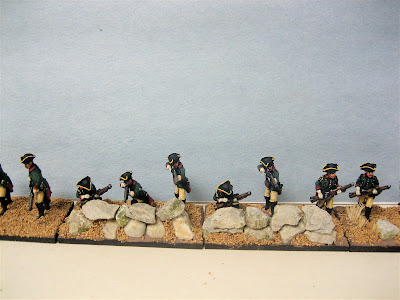 A close up view of the rock wall

I also decided that I wanted to place some of the jagers behind a stone wall of sorts. So when I walked the dogs this morning, I carried along a bag for rock collecting and came home with a nice assortment of rocks. Note: resist the temptation to collect larger rocks, use only the small ones. At 1/56 scale, even the smallest chip of rock will seem like a boulder. I chose some rocks and layed them out in wall formation, looking for some nice fits. Once I had enough rocks, I then glued them together with PVC or Elmer's Glue (the white glue). Later, I would push some spackle compound between some of the cracks in the rocks for added strength.

The figure bases were covered with a goop mixture of pre-mixed spackel compound that I bought at the local hardware store. To this, I throw in a little pot of Howard Hues "Rifle Butt" brown acrylic paint and mix it up until it looks like chocolate mousse or pudding. Then I slather the goop all over the stands, using a tiny artists' palette knife for a trowel. If I want to add any tall grass at this point, then I snip some sisal strands from a kitchen scrub brush and push the sisal strands into the goop. It helps if you build up a mound of spackle on the base in the place where you intend to insert the sisal. The mound of goop provides more depth and support for the sisal. I then dip the base into a pot of fine railroad ballast, from Woodlands Scenics.

Once everything dries, usually within a couple of hours, I will than dab on brown ink and leave a few patches of uninked gravel showing through. I will then dab on white glue in various spots and then sprinkle static grass onto the base. Let it dry overnight. Once everything is dry, I will go back with some watered down green paint and touch up the sisal so that it looks like tall green grass. 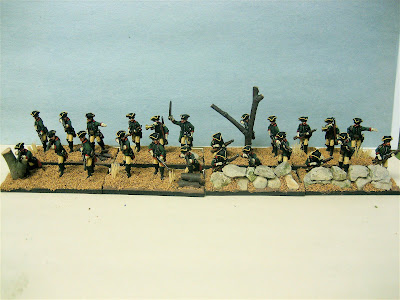 A front view of the whole group. Tomorrow I will ink the bases with brown, then dry brush some tan over the surface, then finally, add the static grass. So these bases are halfway done, as of tonight.
Posted by Der Alte Fritz at 11:24 PM