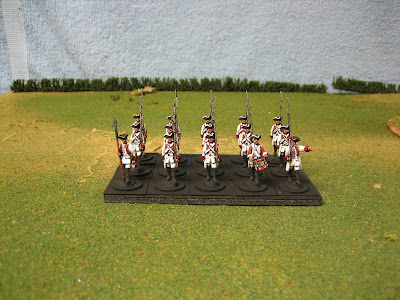 
I finally finished those infernal Esterhazy Hussars last week (see pictures further below) and pitched right into some of those wonderful Minden SYW Austrian infantry that have been patiently waiting on my painting table. Oh what a joy to paint, and what a joy that they are not hussars. I painted the first two figures from start to finish. I always do this when I am working with new or unfamiliar figures, because this gives me a better idea of the order in which I should paint the various parts of the uniform. For example, should I do the first shade of the coat, and then the red facings, or should I paint the skin first? When should I paint the musket and the pack, etc.

After finishing the first figure, I decided that there was still too much black paint showing through on the cross belt lining. This is because I paint the cross belts black, and then paint a white "skunk stripe" (that would be a "polecat stripe" for those readers in the UK) down the middle of the belt. So on the second figure, I painted all of the cross belts light gray and highlighted the belt with a stripe of regular white paint. I think that this technique worked better. 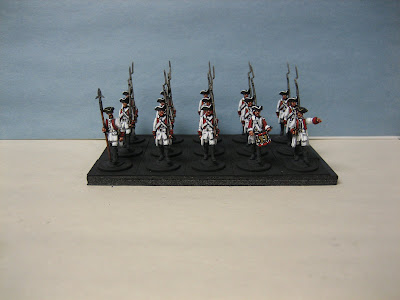 Another view of the first 15 Minden Austrians painted


I selected the Austrian regiment Andlau for the subject of my first Minden Austrian battalion. This is a typical Austrian uniform of white coat and breeches and red facings. The drummers in this regiment still retained the reverse colors, so you can see the drummer in his red coat with white facings. He almost looks Hanoverian.

Regiment Andlau will eventually be 60 figures strong, so what you are seeing in these pictures is the first grand division of 15 figures. I have the next batch of 15 figures primed and on the painting table now, so I ought to have these done by the end of this week, giving me 30 figures. I have tomorrow off as the US celebrates Martin Luthor King Day, so that should give me 3 or 4 hours of serious painting time. I can probably complete 15 figures per week, which is enough to get the battalion completed by the end of January. The regiment Andlau will then see its baptism of fire at the Little Wars convention on February 6th and 7th, 2009. It will be flagged with a GMB Designs flag.

Someone on TMP posted pictures of his Minden Prussian artillery crew along with a Foundry gun (he replaced the wheels with Front Rank wheels to get the size right). This made me take a closer look at my Berlin Zinfiguren cannon, and guess what? The BZ cannon models are nearly perfect for the Minden figures. The gun wheel does stand as tall as the Minden figure's chest, so that is the right size in my book. So I plan to use the BZ Prussian and Austrian cannon with my Minden figures. 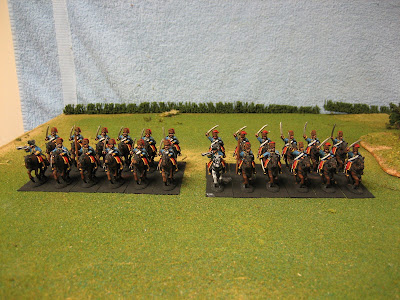 Two squadrons of Crusader Miniatures Austrain Hussars in the SYW


I did not have time to post an updated picture of the two squadrons of Crusader Esterazy Hussars that I painted over the past couple of weeks. They are shown above, without the eventual terraining of the bases. I have one more squadron to paint, but they have been pushed back to the end of the que because I am simply tired of painting all of that dreaded hussar detail, particularly the Van Dyking on the shabraque.
Posted by Der Alte Fritz at 12:10 AM