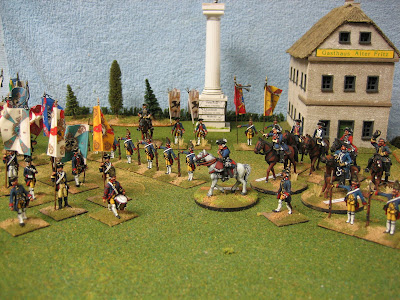 King Frederick II reviews the regimental flags on his birthday.

Yesterday, January 24th, was the anniversary of Frederick the Great's birthday. Now normally, I clear off my 6ft by 12ft wargame table and hold a grand review of the infantry and cavalry. However, this year I still had an unfinished wargame set up and so I could not hold the normal review. I recalled that the Funcken book on the Lace Wars has a nice picture of all of the standards for each infantry regiment parading their flags past the King. So I tried to recreate that picture and thought that it turned out fairly well. 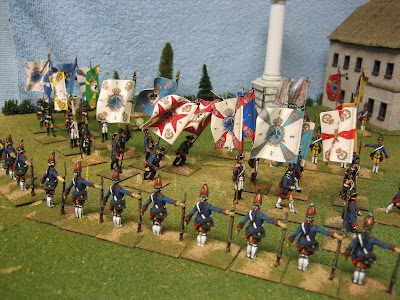 The parade of the regimental standards between an aisle formed by IR6 Grenadier Garde.

I pulled the two standard bearers from each of my battalions and set them up in a parade, in order of the regimental number. So IR5 is at the front of the column followed by IR12, IR18 etc, in numerical order. The two Garde regimental standards were initially placed in the background, in front of the Alter Fritz Gasthaus (this is a model of the actual building in Hochkirch).

Then, to embellish the photo shot further, I lined up members of the IR6 Grenadier Garde (Suren figures) on each side of the parade route. At the head of the column, you can see Frederick himself (Foundry figure) with Bevern (left, holding baton) and Driessen (right, in lighter blue dragoon uniform) and assorted staff members in the third rank. 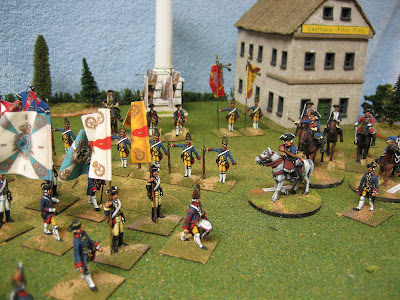 Frederick greets the head of the parade column, lead by a Suren drummer of IR6 Garde. 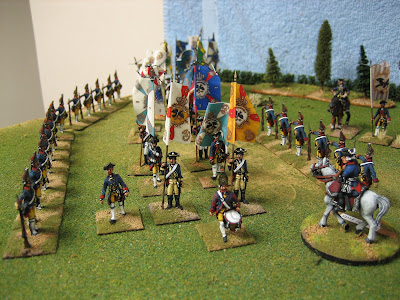 A frontal view of the column as it passes between the ranks of the IR6 Garde. In the picture above, we see Frederick (Foundry) reviewing the standard of the Garde (Suren figures holding GMB Designs flags). I used the Suren Prussian officer figure as my standard bearer because his right hand is open, making it perfect for holding a flag pole. The officer on foot is the same figure, sans flag. The grenadiers at attention are also from the Suren range. 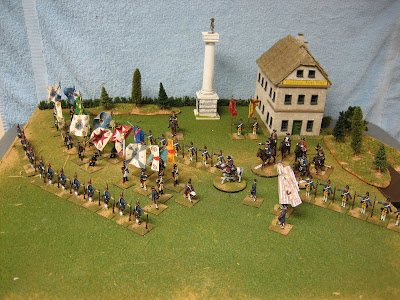 An overhead view of the entire parade ground. Building by Herb Gundt and victory column made by Bill Protz. All figures were painted by Der Alte Fritz. All flags are GMB Designs.

The picture above gives you an aeriel view of the proceedings and provides a better idea of the scope of the diorama, on a two foot square terrain tile that I made. All photographs were shot with my Canon digital SD450 camera, mounted on a tripod for stability. Oh, and turn off your flash when you shoot indoor digital pictures. You will not need the flash.

Austrian Update:
I will be posting more pictures of the Minden Miniatures SYW Austrian regiment Andlau that I have been working on. I completed the second batch of 15 figures yesterday plus the two standard bearers. I started blocking in the grey undercoat on the next 18 figures, which I hope to complete by the end of the month. They should be available to fight in our game at the Little Wars Convention on February 6, 2009. We are going to do Charles Grant's Lobositz game from his book "The Wargame Companion".
Posted by Der Alte Fritz at 1:15 PM