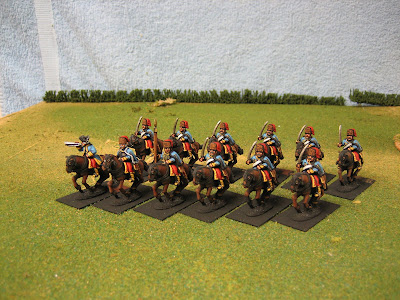 
It is a bit of a paradox that the best looking troops on a Seven Years War battlefield are also probably some of the worst performers. Such would be the case of the hussars for most nations, save those of Prussia who were trained as battlefield cavalry. The corolary to this rule would seem to be that the worst troops are often the most difficult to paint. Again, the hussars cop the honors in this regard. It seems like a waste of my time to paint them, but I need them in my Austrian army.

I have had a package of 39 Crusader SYW Austrian hussars sitting in my Closet O' Lead for two or three years now, just begging to be painted. I had been able to resist their siren song of painting love, but my will power finally broke down just before Christmas (2008). It was probably the playing of our Kleine Krieg Game in early December that opened my eyes to this obvious need. I could also cite the fact that I had built the Prussian cavalry corps up to 32 squadrons of 12 figures each, compared to a paltry and embarassing 10 squadrons of Austrian horse. I mean, we like to win our wargames, but we don't want to just walk all over our opponents (the Austrians) either.

With that in mind, I selected one of the most colorful hussar regiments in the Austrian army: the Paul Anton Esterhazy Hussars (H24). The uniform consists of a brown busby with red bag, light blue pelise and dolman, red breeches, yellow and blue barrel sash around the waist, and their unique yellow riding boots. The uniform was not difficult to paint, but I had a rather hard time painting the shabraque with its yellow Van Dyking atop of the red field. I did not want to spend extra time painting in the jagged Van Dyking edging in black, and then painting over the background with the yellow. It was a painstaking process as it was. 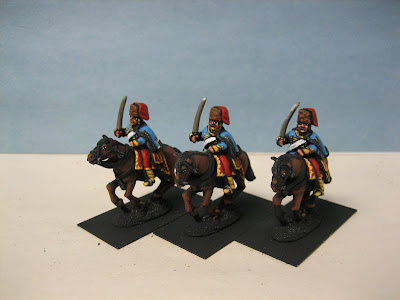 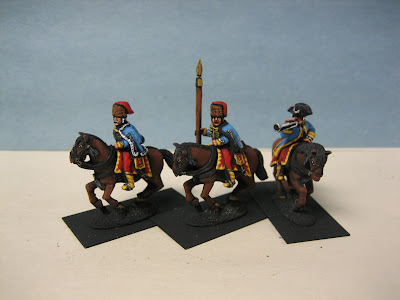 In Christopher Duffy's book, By Force of Arms, he indicates that the regiment served at Prague and Leuthen in 1757. It served as the screening force for the Austrian march from Stolpen to Hochkirch in 1758 and very nearly captured Frederick II in the process. It was at Maxen at 1759 and collected a bundle of Prussian war trophies that are safely ensconced today at their ancestral home at Forchtenstein Castle (near Vienna). More on that later. It was part of Lacy's raid on Berlin. The regiment was not engaged in any major actions during the 1761 or 1762 campaigns.

I must admit to holding a light hearted grudge against the Esterhazys, related to my visit to Forchtenstein Castle in 2005. The castle holds one of the largest collections of SYW era Prussian militaria, collected from the surrendered army at Maxen. The site was also used for the filming of one of the Dracula movies in recent years. In addition to hundreds of captured muskets, grenadier and fusilier mitre caps, uniform coats, cartridge boxes and other bits and pieces of equipment (which I was able to see, for the most part), the castle also boasts an impressive collection of Prussian regimental flags. The flag exhibit hall was closed on the day that I visited the castle, much to my regret (for I will likely never have the opportunity to pay a return visit).

I plan to exact my revenge over the next decade or so by defeating the Esterhazy hussars on the table top in battle after battle. Yes, that will serve those Esterhazys right. Whenever I see the Esterhazy Hussars or the Nikolaus Esterhazy infantry regiment, I will attack them without mercy and cut them down. However, I first must paint said units and frankly I am not enjoying it. Perhaps the Esterhazys are having the last laugh then. Only time will tell.