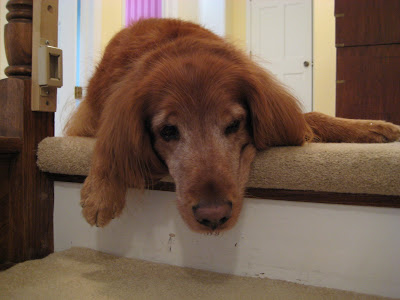 Frederick had his whippets, and not to be outdone, Der Alte Fritz has his Golden Retreivers. We have two of them: Katie (age 12) and Dave (age 6?), the latter of whom is featured in the picture above. We adopted Dave two years ago from a rescue agency that works specifically with Golden Retrievers. We like Goldens because they are so gentle with children and are loveable and fun to be around. We also thought that old Katie would like to have some company, however, that was not really the case. I think that Katie resents having another dog around the castle.

We thought about giving Dave a new name after we adopted him, but somehow, his name seems to fit him just right. We also call him "Big Guy", The Wooly Mammoth, and Aslan (think about it for a minute). The Prinzessin, Lady Emma Cuddlestone-Smythe has taken to Dave and considers him to be "her dog". The big galoot likes to take a tennis ball or Kong toy and place it under the couch. Then he will see if he can paw it out from under said couch. When he can't, or won't, he wimpers up a storm and Himself is forced to fish the toy or ball from out under the couch. After watching The Big Guy do this several times in a row, I realized that he was teaching ME to play fetch. Hurrumph! 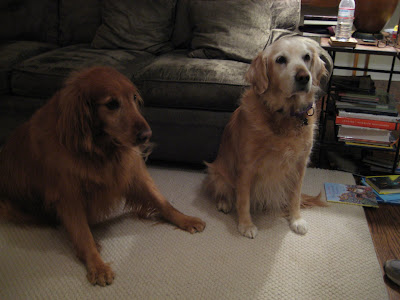 We have had Katie since 1996, so she will be 13 this summer. We bought her as a puppy and somehow survived puppyhood and its attendant house breaking, teething, and gnawing of furniture. We have an early 19th century French pine farm table in our kitchen that Katie decided to "antique" or "distress" a little more with some judicious gnawing of the table leg. Katie puts up with Dave, but at times I think that she doesn't like him. She is definitely the smarter of the two.

It is fun watching the sibling rivalry that my dogs have. Katie will steal Dave's dog toys and vice versa, while Dave will take over Katie's dog bed in the laundry room. They are like children at times, but they are fun to have around the house.
Posted by Der Alte Fritz at 8:13 PM