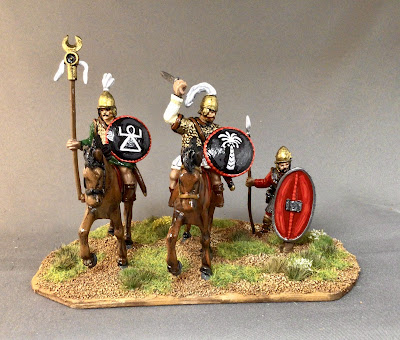 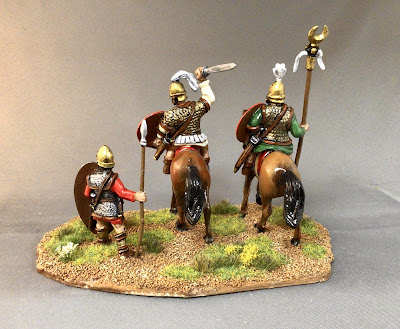 I finished the basing on my command stand for the Carthaginian army commander, Hannibal. The figures are from HaT and are 1/32 scale (54mm). I used figures from the Carthaginian cavalry box set. I bought the figures already painted from another collector, but I basically did a total repaint of all three figures. I left the armor untouched, but everything else was repainted by me. The original shields were a brass color with no shield design on them. I decided that a black shield with a design and a red border would look better.

My lower level commanders that command the "wings" of the army will have a stand of two mounted figures, preferably one carrying a standard of some kind and a figure that looks the part of a commander.

My army commanders have a stand with two mounted figures and one figure on foot. The extra foot figure distinguishes the army command stand from the wing command stand. Both Romans and Carthaginians will use the same basing system.