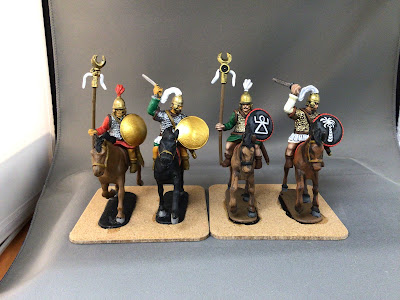 Click on the pictures to enlarge the view
This week I have been working on adding a couple of command stands for my 54mm Carthaginian army. I found a few Carthaginian cavalry figures on eBay and I will use the officer and standard bearer for my command stand. The army commander, Hannibal, will get a third figure (on foot) on the stand. So three figures denotes army commander and two figures denote battalion/wing commander.
I have posted the Before and After pictures of the figures, above and below. The figures with the gold colored shields are the Before figures and obviously the black shields with designs on them are the After pictures. One of the members on the Virtual Wargamers Club (Zoom forum) suggested painting over the gold with the black and I really like the way these turned out. I also have twelve rank and file cavalrymen and I intend to give them black shields too. The line fellows don't need a whole lot of paint touching up so other than fixing some paint chipping on spears, I can paint the shields and use the rest of the figures "as is". 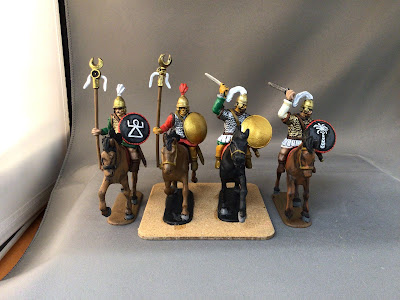 The above picture places the individual figures side by side with their Before and After counterparts. The After figures were pretty much a total repaint job of both rider and horse.

My next post will show my Hannibal command stand after all of the base terraining is finished.