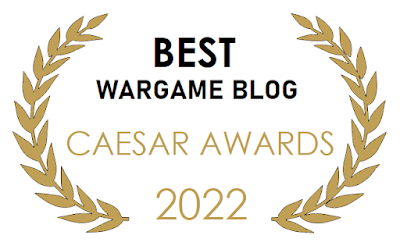 Well, I was completely chuffed (and surprised) to learn that the Der Alte Fritz Journal has won the 2022 Caesar Award for the Best Wargaming Blog. The award is presented annually by Little Wars TV (LWTV) and it recognizes achievements across a broad range of wargame hobby content creators. The crew at LWTV put together their award show each year around the time that Hollywood's Oscar show occurs and the mimic the latter to near perfection.

The lads start the show with a red carpet pre-event show, hosted by um, ah, Richard Clarke complete with a very bad imitation of a British accent. There is even a minutes and seconds countdown shown in the upper right hand corner. The show kicks off with an introduction by a sort of Matthew McConaughey  that is even sponsored by Lincoln Navigator (well, sort of).

Greg is the MC and host of the event and introduces the other Little Wars TV members decked out in black tie. The nominees are introduced and then the envelope is opened and the winner is announced. Numerous clips/cut aways of the crowd at the real Oscar ceremony are interspersed throughout the show. Needless to say, the production quality and humor evident in all LWTV movies are in the Caesar Awards show.

The 2022 Category Award Winners Are:

I am amazed by the creativity of all of the pod casts and video channels that are put together by the wargaming hobby and I will certainly be visiting many of the nominees' sites to see and hear more.

Once again, I am honored to receive the Caesar Award for the Best Wargaming Blog. I thank the LWTV crew, the judges and whoever nominated my blog for the award. Click on the link provided above and spend a quick 20 minutes to watch the show, get a good laugh, and maybe even learn about some new content providers that you were not aware of.

See you next year at the Caesars.