Shuffling Off to Washington DC 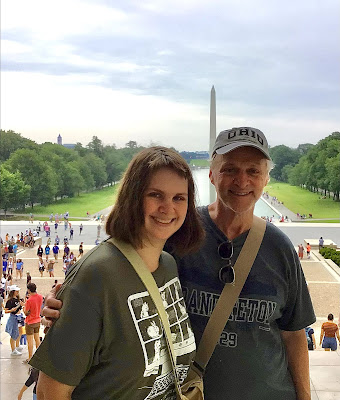 Lelia and I took a break from traipsing ACW battlefields and visited our nation's capital, Washington DC. We also made a side trip to Mount Vernon to visit George Washington's home. More on that later. This was Lelia's first visit to Washington DC and so I got to enjoy seeing the city through her eyes. I hadn't been to the city in quite some time and so I had forgotten how spectacular The Mall looked.

It was a Saturday morning so the inbound traffic wasn't very bad. We were approaching the city from the Virginia side and there comes a moment when the road descends a hill and suddenly the whole city of Washington DC lies there in front of you. Lelia's look of astonishment at her first viewing of the city reminded me a bit of Dorothy seeing the Emerald City of Oz for the first time. Fortunately there were no flying monkeys involved in our travels.

I am posting pictures of the three buildings as they would line up:

OK, I've been saving the best for last: our mile long trek to the Lincoln Memorial. It looked like a long way from our position next to the Washington Memorial and the temperature was very warm. Lelia was game to give it a try and she made it fairly easily. 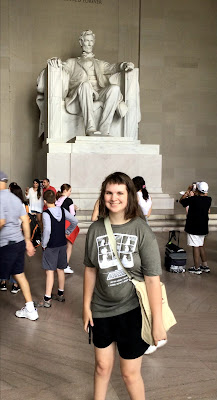 Having seen most of the sights along the National Mall, we decided to drive to Mount Vernon, George Washington's house on the Potomac River. The GPS Gremlins were on the prowl again and they did their best to get me lost in some residential housing area nearby. After much gnashing of teeth and a few choice words, I was able to disable Siri and let my car GPS take us to the site.