Lelia and I left Antietem and took the long road off the beaten track to Harper's Ferry, West Virginia. The whole town is a "national park" and there is some ground on Bolivar Heights where Stonewall Jackson's Confederate Corps defeated the 11,000 strong Union garrison of Harper's Ferry.

Harper's Ferry is situated at the confluence of the Potomac River and the Shenandoah River and the town is surrounded by high hills on all sides. The town is famous for several things: (1) John Brown's Kerfuffle began and ended here, and (2) there was a Federal armory that made firearms for the US Army. At the start of the Civil War, Union troops burned down the armory so that it would not fall into Confederate hands. The North figured that it couldn't hold Harper's Ferry against any Confederate attack. And they were right.

In September 1862, during Lee's invasion of the north, leading to the battle of Antietam, Stonewall Jackson's corp was tasked with capturing the garrison so that there would not be 11,000 Federal troops in the rear of the Confederate invasion of Maryland. Jackson's corps surrounded the town from the heights and that was pretty much the end of the ball game for the Union garrison. Jackson left AP Hill's division at Harper's Ferry while he marched with the rest of his corps to Sharpsburg to join up with the rest of Lee's army.

After the Civil War, the fortunes of the town were in steep decline as the Federal armory was not rebuilt and the age of the locomotive steam engine diminished the importance of commercial river traffic, thereby rendering the town obsolete.

I hadn't been here for at least ten years, likely longer, and the visitors' center had been moved quite a ways out of town over the intervening years. This means that you have to park your car at the visitors center and then take a shuttle bus into the town. The town seemed very crowded for a thursday afternoon.

Other than the main street, which is on level ground, most of the town is situated on the hillside and the pitch of the streets is very steep. The stores are what I call the tourist trap variety, selling T-shirts and candy at exhorbitant prices. The terrain was tough going for Lelia (she has a physical disability) and the temperature was around 90-degrees Fahrenheit, so it was hard work going up and down the streets. Bring several bottles of water if you visit in the summer.

Here are a few of the pictures of the town that I took.

Here are some pictures of some of the buildings on the main street in town. This is the only level street in Harper's Ferry. Every other street runs up hill at a steep pitch. 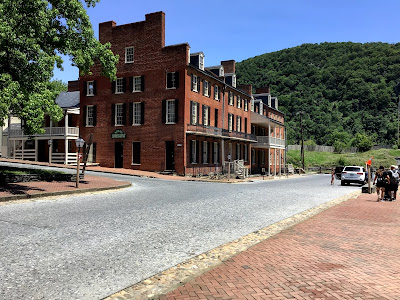 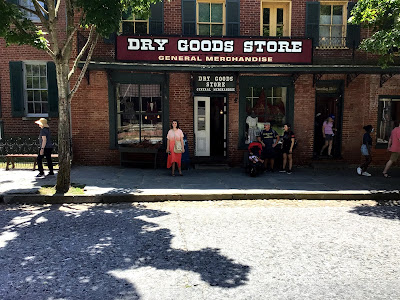 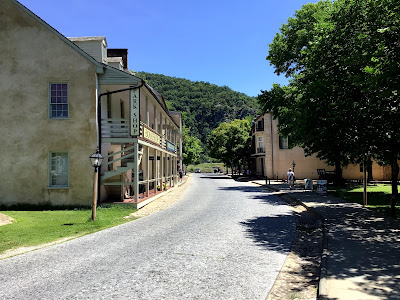 Harper's Ferry is an interesting town with an interesting history, but it is not a place that merits spending a lot of time visiting. Nevertheless, if you are visiting Antietam then you might as well spend part of the day visiting nearby Harper's Ferry. And don't forget to bring your sunscreen and water bottle. You will need both.
NEXT: Washington D.C.
Posted by Der Alte Fritz at 9:58 PM