The day after our visit to Washington Diet Coke (you see what I did there?) we travelled south to Fredericksburg, Virginia to see four Civil War battlefields in one day. Within a few short miles of each other, one can visit Fredericksburg (1862), Chancellorsville (1863), The Wilderness (1864) and Spotsylvania Court House (1864).

We left our base in Warrenton, Virginia and headed south on US17 to Fredericksburg, following my paper Rand Macnally map. I'd had enough of Siri sending me in the wrong direction time after time.

Our first stop in the town was at the Visitors' Center where we were able to get the lay of the land and directions for how to get to Marye's Heights. I knew the general direction of the ground but I was having a rough go of finding the correct road that leads to the battlefield visitors' center. Once there, we joined a park ranger tour of the Sunken Road area and snapped some of the pictures shown below. 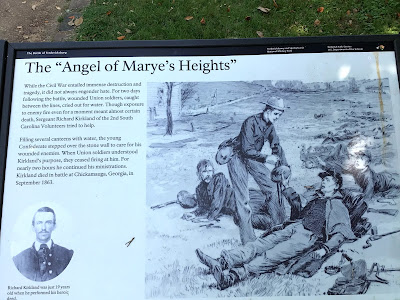 While the Union assault on Marye's Heights gets all of the publicity about the battle, the battle of Fredericksburg was won or lost further to the south (right flank of the Confederate line held by Stonewall Jackson) on the high ground around Prospect Hill. 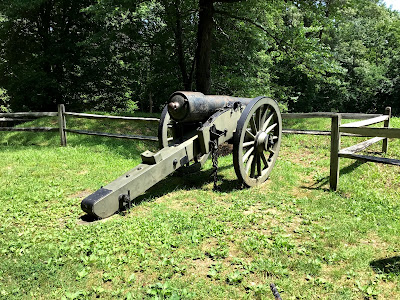 After viewing the area of Jackson's corps on the heights on the right flank, we ventured down to the open plain below, called the Slaughter Pen Farm area of the battle. Major General Meade's division attacked across this open ground towards Jackson's lines. There was a clump of woods sticking out like a salient, full of muck and mire, such that Jackson did not think that any troops could advance through such terrain. So he had the area lightly defended. Of course, this is precisely the point where Meade's attack broke through the Confederate line. However, Meade was not reinforced by the rest of the corps and so he was not able to solidify his lodgement in the Confederate line. The Confederate counter-attack eventually forced Meade to withdraw back to his starting point.

The Slaughter Pen Farm is a wide open tract of farmland that was preserved by the American Battlefield Trust (formerly called the Civil War Trust). Historian Ed Bearss called 208-acre Slaughter Pen Farm "one of the most significant tracts of land in the war". The ABT was able to raise the $12 million dollars needed to purchase the land and save it from developers, who wanted to build a light industrial park on the land. As you drive south from Fredericksburg on US1 towards Richmond, VA you pass vast tracts of land lost forever to light industrial buildings, schools, residential housing and other buildings. This is what would have happened to the Slaughter Pen Farm had the ABT not stepped in to purchase the land.

The first three pictures, below, provide a panorama of the battlefield, starting from left to right. The wooded area in the background is where the high ground was located - occupied by Jackson's Confederates.

The Civil War Trust, Central Virginia Battlefield Trust, and other preservation groups erected plaques that list the names of all of the donors who collectively came up with the necessary funds to purchase the land. 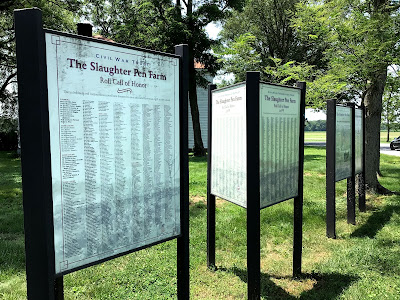 I was one of the donors for this piece, and others, of land saved by the ABT. 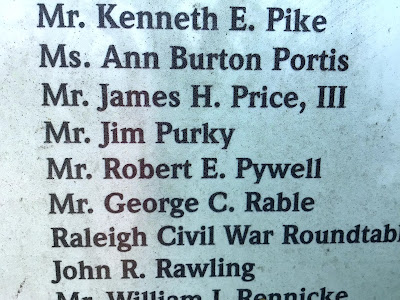 I encourage any of my readers with an interest in the American Civil War and historical land preservation efforts to click on the following link: American Battlefield Trust and just peruse through the web site to see what the organization has done to preserve land and to view current fund raising efforts. You don't have to donate any money, but if you are so inclined, then any amount, small or large is helpful. Even a $5 or $10 donation helps the ABT. Think of it as foregoing one cup of coffee from Starbucks for a week.
NEXT POST: Chancellorsville, Wilderness and Spotsylvanis C.H.
Posted by Der Alte Fritz at 1:37 PM