You'll Be Back! Happy Independence Day!

You'll be back, soon you'll seeYou'll remember you belong to meYou'll be back, time will tellYou'll remember that I served you wellOceans rise, empires fallWe have seen each other through it allAnd when push comes to shoveI will send a fully armed battalion to remind you of my love!
Well, one thing that was back was a traditional Fourth of July celebration day this year in 2021. We went to the local Lake Bluff Fourth of July Parade this morning and I have to say that it felt good to be out in the sunshine, frying due to a lack of sun screen, and watching Ameicana right before my eyes. To wit, kids running around water balloons, families and friends gathering for a picnic along the parade route, adults drinking way too many beers at 9:30 A.M, uh, never mind about the latter.
This year's parade was smaller than normal due to Covid-related restrictions and social distancing, I guess. Marching bands were eliminated as were any groups that had to walk rather than ride on a parade float or trailer. There were several small bands that had their equipment set up on flat bed trailers as they rolled along the parade route. There was even a truncated Highland Pipe Band that had a few pipers and drummers riding in the back of a pickup truck - how's that for an image.
Here are a couple of the bands: 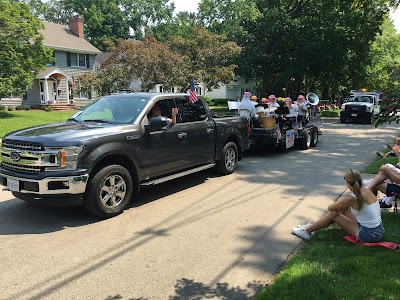 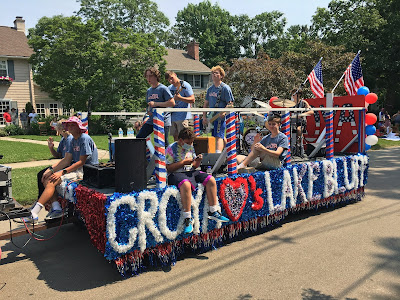 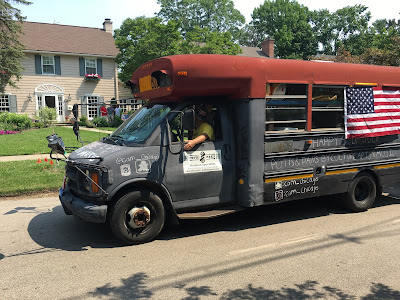 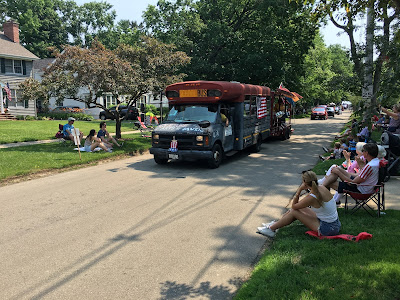 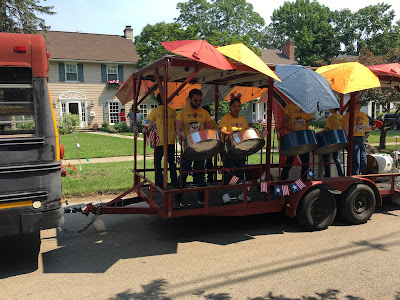 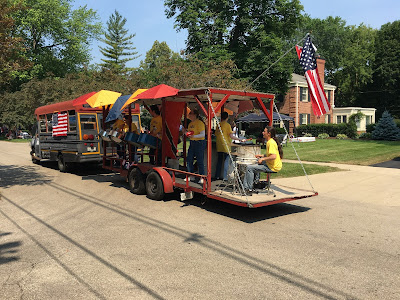 There were several "floats" that featured Darth Vader or Bobba Fett for some reason. Apparently The Force played a role in our independence from Britain. 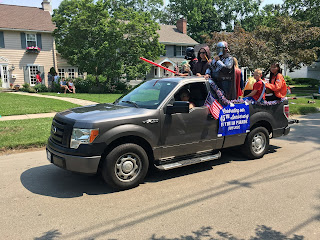 The parade always has an assortment of old cars showing off. 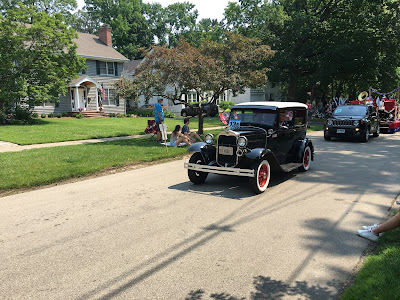 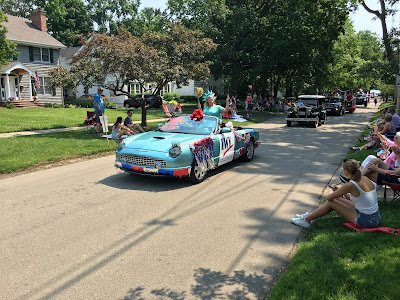 The Civil War re-enactors usually lead off the parade, carrying the old Stars and Stripes, and firing a musket volley. Not this year though. Friendly chaps, none the less.

Lelia wanted to go to the parade primarily to watch and hear the pipe bands. We did not expect to see them due to the "no walking" rule so it was a nice suprise to see The Midlothian Bank playing some tunes to the scirl of the pipes. 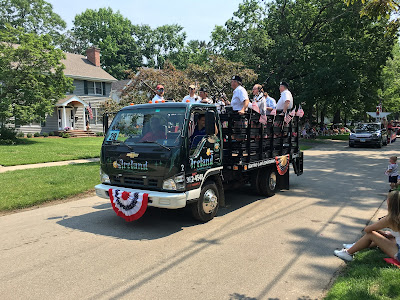 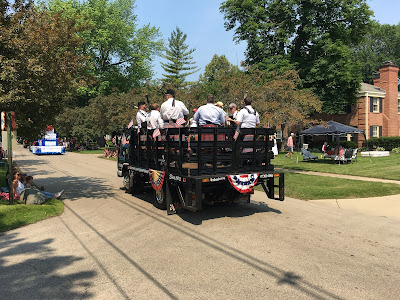 Alas, they were taking a music rest as they passed our position and then, naturally, started playing again as their truck rolled out of sight.
It all seemed to work though even with all of the changes made for this year's parade. What made it all work was watching families and friends gathering together along the parade route and just having fun on a sunny Fourth of July day.
After the parade, we headed home and got the house ready for a barbecue party with friends that we have not seen in person for over a year. That was the best part of the day for me. I did the grilling of the burgers and brats (it was hot outside!) on the Weber grill outside while our guests stayed in the comfort of the air conditioned house. I received lots of compliments for my grilling skills, which I must admit, are decidedly average. However, on a day like this, one's effort is greatly appreciated.
Later tonight we will walk a few blocks down the street and take up our perch from which to watch the town's fireworks display.
I think that Americans needed a somewhat normal Fourth of July with parades, parties with friends and fireworks. Maybe I'm a bit maudlin about the day, but July Fourth serves to remind Americans that we have a lot more in common than we do our differences.
Posted by Der Alte Fritz at 7:56 PM