Modeling The Governor-General's Palace In Khartoum

Over the July 4th weekend I decided that it was time to grasp the nettle and start buiding 1/32 scale Middle Eastern buildings to represent Khartoum in my 54mm Sudan Project.

I found some ornamental wood trim at Home Depot. The twisted piece makes for a nice Arabic column. Another piece of trim is glued to the facade to cover the join of the roof to the front facade.

Cross beams are now glued to the front and back of the building. These will serve as a beam on which to rest the veranda floor in the front of the building. A similar beam on the back and sides break up the mass of the walls and provide an element of architectural interest. Windows and doors will be added later.


A two-inch wide piece of balsa wood forms the veranda floor which is supported by plain columns made out of dowel rod. I made some templates for the front windows/doorways out of paper and they give me a hint at how the finished model will look. One of the paper windows has been replaced by one made out of balsa wood.


The palace would look rather boring or incomplete without some kind of focal point on the roof. I found some pine rosettes in varying sizes at Home Depot. These cost around one dollar each. I stacked them up to create a more interesting skyline silhouette. I might add a roof top handrail on posts, but that might be too much work for me. I think that a handrail on the front veranda would be appropriate though.

Now we have an idea of how the palace will look when it is finished. Obviously there is still much work to do such as adding window on the back and sides of the building and more doors on the ground floor in the front.

The building will be painted either to match the color of the other buildings or it could be an off-white color. All of the buildings will be attached to cork placemats in a modular format. I will be able to mix and match various modules together to create different looks. The cork will be painted.

I sprinkled a few civilians around the town center for the photo shoot. These are 54mm toy soldiers from Trophy of Wales Miniatures. I wish that I could find some Middle Eastern civilians to populate Khartoum .  Any suggestions are welcome. 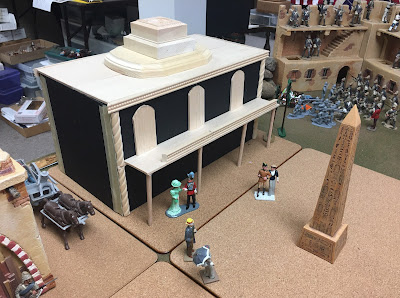 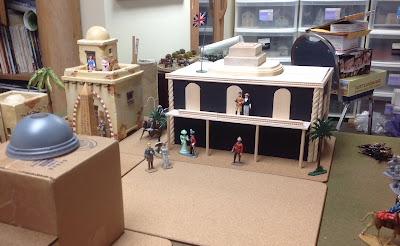 And finally:  a pre-made minaret arrived in the mail from King & Country Miniatures. I was going to make my own minaret, but when I saw this model, I had to have it. It is perfect for the scene and gives the town a Middle Eastern feel. I will have to build my own mosque and leave a place on it for the minaret. The dome of the mosque will be made from a lid for a coffee drink from Starbucks.


I am tempted to push the town walls out further to create more space for the city behind the walls. The Palace should have a formal garden in the front and I could add the town armory  next door to the Palace.


The model will soon be ready for paint and I am kind of anxious about this step. The main thing is that I don't want the foam core board to warp when it has been painted. I did some test work on a piece of half-inch thick piece of the board and it didn't warp. The eighth and quarter inch boards warped so I won't be using these thicknesses.
Posted by Der Alte Fritz at 9:08 PM