Behind the Walls of Khartoum

I have been working on some building "mock ups" to portray the city of Khartoum in the area behind the walls of the city.

The Modeling Professionals
Seeking some ideas and inspiration, I found some very attractive model Middle Eastern buildings on the internet. These building models were made by professionals, but hopefully I can use some of them to guide my building of models for my version of Khartoum and Suakin. 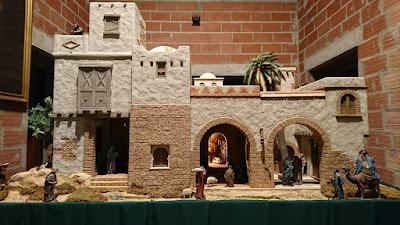 Yesterday I decided to build a mockup of a possible layout for my version of Khartoum in 1885. I already have three 54mm buildings from King & Country Miniatures that form the basis of the town. However, it is obvious that I will need many more buildings, so I started a mock layout using cardboard boxes to give me an idea of how much area I have to work with behind the city walls.

I placed some pieces of ornamental wood blocks on top of some of the buildings to add some architectual detail. The round and oblong bases were bought at Michaels Stores. The Two square blocks are rosettes purchased from Home Depot. The minaret is a cardboard tube from a roll of paper towels, topped by a round MDF base and stacked with some 1-1/2 round discs that were purchased from Michaels. You can see various toy soldiers standing next to some of the "buildings" to give some context to the size.

What's Next?
Now the question is, how will I actually make the buildings?

My first building will be made from cardboard, using either an existing box or wall pieces that I will cut from heavy duty liner board that I have been saving over the past year. Some of the liner board used for shipping consumer products are quite sturdy and should be easy to cut to size. Then it is a matter of adding things such as windows and balconies and stairs made from bass wood and plywood.

The big question and concern is, how to paint the model so that it doesn't warp from the paint? I will probably start with a small building to work out some of the construction details and to see if it can withstand warping when I paint it.

I would like to use pre-mixed wallboard paste (Spackel compound) to create a stucco or adobe texture and look. Experiments indicated that nothing less than 1/2-inch thick foam core will resist warping. The eight inch and quarter inch thick pieces warped when I applied the spackel.

I've been reluctant to start the modeling project - fear of the unknown I guess. I think that I can do the construction part, but it is the painting and warp prevention parts that give me pause.

I guess that the solution is simply to give it a go, hope for the best, make some mistakes, and learn from my mistakes.