The Web-store Project
My retirement gives me a lot more time to work on projects that have been on the back burner for some time, and high on the list is to paint every single SKU (stock keeping unit ) in the Fife & Drum and Minden figure ranges. For example, if a product code has eight marching soldiers, then I have to paint all eight of the figures so that I can photograph them and upload them into the Fife & Drum web-store. You can view the work in progress by clicking on the links that I have provided below.

The first link below takes you to the Fife & Drum Web Store Home Page:

The second link, below, takes you to the Minden British figures page on the Fife & Drum web store:

While you are at it, scroll around the webstore site (click on the pull down menus for each country) and take a look at the progress that I have made on adding color pictures of every SKU in the ranges. It is quite an undertaking, but it is well worth the time and effort to do this.

One Thing Leads To Another
During the course of this project, I have tackled the British army figures in the Minden range and have enjoyed painting them so much that I have decided to start a new British and Hanoverian SYW army for my collection. Painting the individual product codes has given me a head start on a number of units such as Hat Men, Grenadiers, Dragoon Guards and Dragoons. However, it is the Highlanders that have really caught my eye so I decided to forge ahead and paint a 32-figure regiment of Kieth's Highlanders in the marching pose. I also plan on painting the 88th (Campbell's) Regiment of Highlanders in the firing poses.

My Kieth's Highlanders Regiment will have 32 figures based eight per stand on four bases. An NCO or drummer will be posted on both the far lefthand and righthand bases, offset a bit to create the appearance of a third row of soldiers. The figures will be spaced closer together than in my Austrian and Prussian armies. It is easier to correct the spacing on new units than it is to rebase every infantry battalion in my SYW collection, so the new armies get the new basing style.

I have painted a few samples of the firing line poses, a couple of which are shown below: 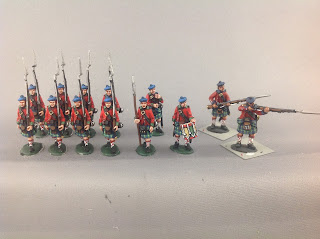 As of today, I have 24 of the 32 figures painted for Kieth's Highlanders and hope to have the final eight finished today or tomorrow, afterwhich I can base them up. I have ordered flags for both regiments from GMB Designs, which to my mind, are every bit as good as some of the hand-painted flags that we see here and there.

We have added a new product code for Maxwell's Grenadiers MBR-001 which includes 32 foot figures and one mounted officer. This has a retail value of $70.00 but the regimental pack sells for $60.00, giving you a 14% discount over the cost of purchasing the individual packs that make up the regiment.

As you can see, I have been keeping myself very busy over the past two months working on the web store pictures and, coincidentally, starting my own Minden British army. More to come.