I completed Keith's Highlanders over the July 4th holiday and finished the basing and grassing yesterday. I thought that they turned out rather nicely and found that they were not very hard to paint, plaids not withstanding. The hardest part of painting Highlanders is their hosiery - it's hard to get those "X-lines" to match up as you paint the lines around the leg.

I temporarily used the AMG XVII flags that Bill Walker ("Captain Bill") made for me so that I could show off the unit with some colours. I am awaiting the proper GMB flags for the regiment that are on order.

A New Basing System
The regiment was based a little differently from my Austrians and Prussians. I decided to move the soldiers closer together and to increase the number of figures from 30 to 32 so that I could add two drummers on each flank of the regiment. This created somewhat of a conundrum as I had to figure out a way to place the figures on the stands. Four stands of 8 figures would have made the most sense; its symmetrical and looks nice, but then I couldn't do the 'drum on the flank' thing.

Then I decided that 9 figures on the end stands would look good because I could have my 8 rank and file yet still have room for the drummers. That accounts for 18 figures and so I had to figure out a way to distribute the remaining 14 figures. Seven figures on the two stands didn't look good to me as there would be a gap in the ranks for the extra figure and I didn't want two stands of 8 figures because that would bring me up to 34 figures.

Army Command Stand Revisited
I thought that it would be a good idea to repost the picture of the command stand for the Highlanders. These were a made as a gift to another wargamer in the UK, but I will probably paint another one for myself in the near future. The figures used on this stand are the standing Highlander command pack plus the British mounted colonel in the Minden range. 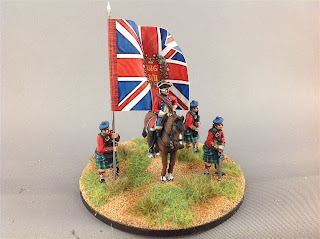 Next in the queue is a Highlander regiment in the firing line poses and these will be painted in yellow facings and become Campbell's (88th Regt. Highlanders).

How I paint tartans
I start with a base color of navy blue for the plaid. Then I painted light green window panes on the kilt. Finally, I mix some white into the green color that I used to lighten it up a bit and then I use this mix to dot anywhere that two lines meet. It's pretty simple and it looks good. The same method should work on other plaid combinations.