The two armies (Webster's British - 7SPs and De Kalb's Americans - 10 SPs) have come into contact along the Catawba River in northwest South Carolina. Prior to the action, however, there was a considerable amount of pre-battle scouting and skirmishing going on behind the scenes. Today's post depicts the cavalry skirmish that took place prior to the battle.

Francis Marion and his band of South Carolina Mounted Militia had been posted ten miles ahead of De Kalb's American army. Marion's orders were to locate Colonel Webster's British and alert De Kalb of their arrival.

Please read the picture captions to follow the action as it unfolds. You can also click and double click on the pictures to enlarge them for easier viewing and examination. Most of the terrain was built by Herb Gundt and all of the figures are from the Fife & Drum AWI figure range.


Note how the British light companies were only probing the American line and then they fell back to reorganize once the rebels had revealed themselves. There was no point in just charging into the militia when their mission was simply to find out where the rebels were. The heavier infantry fighting would come later in the day.


William Washington's regular Continental cavalry wins the melee along the Winnsboro Road and chases the British dragoons away. However, upon sighting a column of British infantry marching up the road towards Fisher's Crossing, Washington sounds the recall and his dragoons retire back towards the Catawba River to protect the bridge crossing.This allows the rest of the American cavalry and militia to retire across the river in good order.

The cavalry have done their job, there is no need for them to stand and fight formed British infantry at this time. That is the job of De Kalb's Continental infantry. 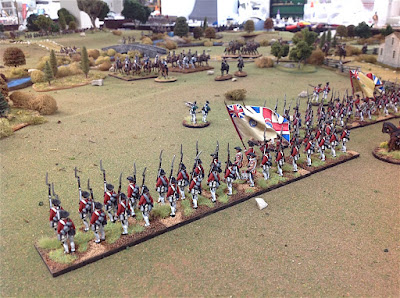 Summary of the Action
And so ends the cavalry skirmish and battle that occurred on the south bank of the Catawba River at the little hamlet of Fisher's Crossing in South Carolina.

To recall, the action began with Francis Marion's mounted militia first sighting some British light dragoons along the Great Wagon Road (one of the main roads spanning the length of South Carolina from Ninety Six in the western part of the state, to Catawba Town along the SC/NC border.

Marion sent word back to Major General De Kalb that British forces were moving towards Fisher's Crossing. De Kalb sent Marion back to delay the British scouts while William Washington brought up the 1st and 3rd Continental Dragoons to assume the task of fighting the regular British cavalry.

Both sides fed more and more of their men into the action around the cross roads at Fisher's Crossing. The British 16th LD gained the first advantage, tumbling a troop of the 1st Continental Dragonns back towards the Catawba River. However, William Washington sent in his reserves and restored control over the Great Wagon Road. At around the same time, more British cavalry was spotted approaching on the American's flank from the Winnsboro Road.

Washington sent skirmishers down the Winnsboro Road, forcing the British cavalry to deploy. A skirmish followed on that road and to everyone's great surprise, the British 16th Light Dragoons routed. American jubliance was quickly tempered by the arrival of British infantry on both roads, indicating that the cavalry had done its job and that it was time to extract itself from the fight and retire across the Catawba River.

While the cavalry action was taking place on the south bank of the river, General De Kalb was quietly deploying his army in the dead ground behind the ridge along the north bank of the Catawba River. The American cavalry had screened De Kalb's troop deployment and had he had his army arrayed in battle line, ready to meet the British army along the banks of the Catawba River at Fisher's Crossing.

Coming Next
Our next report will focus on the main battle, later this week.

About the Miniatures
All figures shown in the pictures are from the Fife & Drum range of AWI miniatures, sculpted by Richard Ansell in 1/56 scale (approximately 30mm in height).

Marion's Mounted Militia figures are all conversions of existing Minden or Fife & Drum figures. These figures will soon be put into production and added to the range probably in the Fall 2017.

We will be adding South Carolina Continentals in the Fall of 2017.

About the Terrain
Virtually all of the terrain, including buildings, fences and trees were made by Herb Gundt. The river sections are from JR Miniatures; the stone bridge is from Miniature Building Authority, the road sections were made by me around 1990 and they are still holding up very well after all of these years.  The ground mat was made by The Terrain Guy, sadly no longer in business.
Posted by Der Alte Fritz at 12:12 PM