The South Carolina campaign has resumed now that I'm back from my trip to the UK. Recall that we had a British victory at Winnsborough on Turn Three. We continue with the moves for both sides on Turn Four, which has resulted in one battle that will be fought at McDowell, in the Carolina backcountry between Sevier (4SPs) and Tarleton (3SPs). 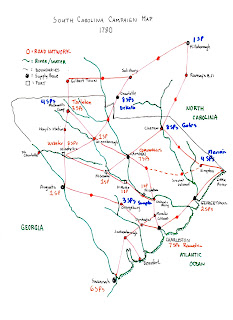 A REQUEST FOR HELP

I was wondering if anyone with Adobe Illustrator and Photoshop or some similar program could take my basic map and make it look more professional so that I do not have to present handwritten maps on every turn. I could then draw in the SPs of the two sides each turn by hand or if you can help with a map update on each turn, add the SP information so that it is not hand drawn. Some form of compensation for your work could be worked out between us.

DeKalb falls back one dot to Catawba Town with 8SPs following his loss at Winnsborough. We deducted 1 SP from his army for casualties and 1 SP for losing the battle. His 10SP army has been reduced to 8SPs. Dekalb retires 1 dot north to his supply base at Charlotte.

Gates moves one dot south to Cheraw, SC with 8SPs

Marion takes command of the Partisan Uprising that occured on Turn 3; he moves 3SPs south to Kingston, to possibly threaten the British garrison at Georgetown (2SPs).

Another Partizan Uprising occurs at Orangeburg. Thomas Sumter takes command with 3SPs. Sumter has to hold at Orangeburg for one turn since the uprising is his move. This potentially cuts off the route from Charleston to Augusta and positions Sumter for an attack on the British supply base at Augusta.

Sevier holds at McDowell with 4SPs. He will engage Tarleton in battle on this turn.

There is 1SP in the Hillsborough, NC American supply base that supports Gates' move south.

Cornwallis dispatches Tarleton with 3 SPs to pursue Sevier towards McDowell. He leaves 1SP at Winnsborough and retires back to his supply base at Camden with 6 SPs, resulting in a total of 7SPs at Camden.

Webster moves 3 SPs from Augusta north to Ninety Six, joining Cruger's garrison of 5SPs. Webster assumes command of the 8SPs at Ninety Six due to his seniority. He leaves 1SP at the Augusta supply base.

All other British forces remain in their positions from the previous turn: Rawdon at Charleston with 7SPs; Savannah with 6SPs; Georgetown with 2SPs; and Forts Granby, Motte and Watson with 3SPs collectively.

As noted above, Tarleton (3SPs) will fight Sevier (4SPs) at McDowell. Sevier elected to accept battle rather than retreat  to Gilbert Town, NC.
Posted by Der Alte Fritz at 11:26 AM