Vikings & Saxons For Sale, Oh My! 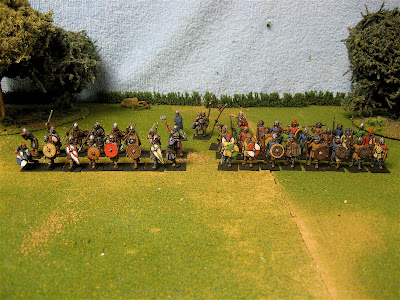 Saxon shield wall: Gripping Beast Thegns on the left and a mix of GB and Essex Fyrd on the right. I still need to finish terraining the bases though. Ratty blue towel from Cannon Mills.

All of the Dark Ages buildings and figures that I am featuring this week are for sale as His Fritzness has declared that the Closet O' Lead must be cleared out to make way for some new things that are in the pipeline.

Yesterday's blog posting featured the very fine Norman keep made by Herb Gundt and today I will feature my modest army of Normans (15 figures), Saxons (43 figures) and (Vikings 50 figures). That is a total of 108 figures that are for sale at $5.00 per figure, or $540 for the whole lot. 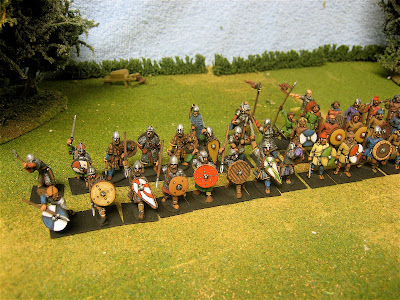 A closer view of the Saxon Thegns (the first 16 on the left in two ranks) are from Gripping Beast. There are a total of 19 of these heavy infantry. The Saxon Fyrd figures start with the chap in the yellow shirt and yellow/green shield. There are 24 Fyrd, a mix of GB and Essex. The Essex figures really look good, even by today's standards. 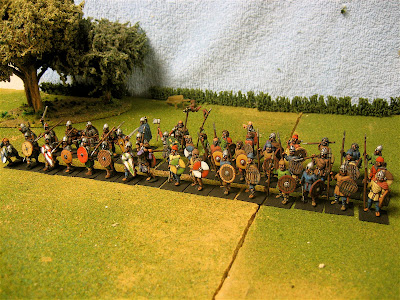 A closer view of the Saxon Fyrd, deployed in three ranks. Gripping Beast earls direct the battle from behind the shield wall. In truth, they probably would have been leading from the front of the shield wall, but they are obviously ancestors of Harry Flashman. 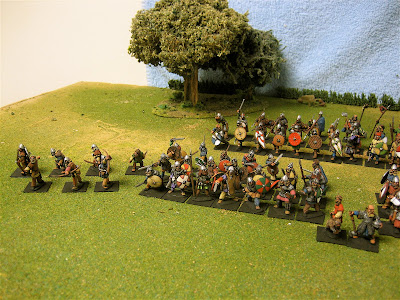 A view of some of the Viking archers supporting the shield wall. The warlord and his servant, holding back the wolf hound, lead from the front - where else? These are all Gripping Beast figures in this picture. 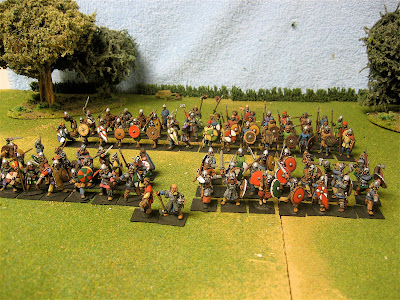 Here is the whole hoard of Vikings in the two front shield walls, with the Saxons in the rear. The right hand Viking hoard is mostly Perry-sculpted Foundry figures.

The Viking warband consists of 21 lightly armored Bondi, 7 archers, 20 warriors in chainmail, 1 warlord and 1 servant with wolf hound. I also have 15 Normans (Foundry figures from the Perrys) that are not shown in these pictures.

My preference would be to sell the Norman Keep ($500) and all 108 figures ($540) in one lot. If I only sell the keep, then I won't need the infantry, and visa versa. So here is the deal for the entire lot, $900 buys you the Norman keep with separate moat base and land ramp, plus all 108 figures. I will also finish terraining the bases. And as God is my witness, I will get rid of that blue towel if someone will purchase the Keep and the Vikings, Normans and Saxons.

For more information, contact me via e mail at: altefritz1740@yahoo.com

Tomorrow, I will take some pictures of the Gripping Beast Viking longboat that Herb Gundt painted, assembled and customized for me. It probably is not something that could be shipped in the mail without breaking, so I am not sure that I will be able to sell it, but will entertain offers none the less. I will also post piccies of some Saxon farm houses and a meeting hall that Herb built for my Dark Ages project. They are real beauties!
g
Posted by Der Alte Fritz at 12:23 AM