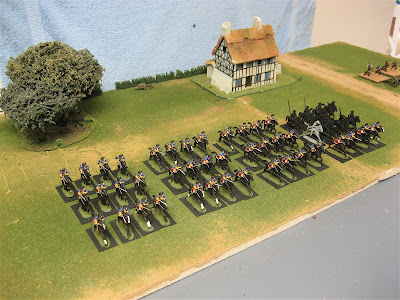 Prussian Bayreuth Dragoons (DR5) in the process of being rebased onto single stands. These are RSM figures that will be leaving my collection very soon. Click pix to enlarge the view.

I have a few pictures that I wanted to post for some clients who are buying figures from me, so please bear with me today as I post some work in progress pictures. I thought that everyone else would enjoy seeing what I have been up to lately, on the painting front.

First up are some pictures of the Bayreuth Dragoons, which one of my clients wanted to convert into a BAR style unit of dragoons. The unit already had 40 figures, mounted two per base, so it was a matter of painting eight more dragoons to build the unit up to 48 figures, or four squadrons of twelve figures. I decided to add three more officers and three more standard bearers so that each of the four squadrons would have an officer, standard bearer and ten troopers. The unit will also get new GMB Designs flags to finish them off. 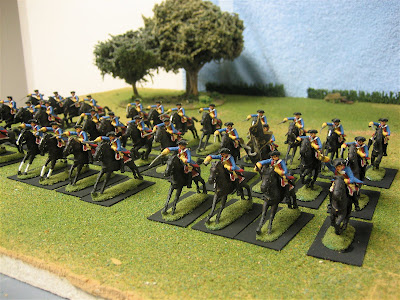 A closer view of the command group.

The toughest part of the job was removing the figures from their old wooden bases. The painter, Bill Biles, had used wood glue to afix the castings to the wood bases. I tried my usual trick of sticking the figures in the freezer for two hours, in order to debond the glue, and then pry the figures off of the bases. The trick works with wood glue, but it is not as effective as it would be were I trying to debond superglue. It was a real chore prying off the figures and at least once I had a near run thing with the very sharp Exacto blade that scared the bejeezus out of me. I did learn that I should only take a few stands out of the freezer at a time. You have a minute or two to pop the figures off the stand with ease, and then after that, the job becomes more difficult.

Next, I will have to paint eight more figures to bring the unit up to 48 figures. The first picture at the top of the page shows you how the regiment will look when it all comes together.

Next we have some Austrian artillery crews that are in the process of getting rebased. These were also painted by Bill Biles over a decade ago. The picture below shows the bases after the spackle compound and fine grit or railroad ballast has been applied to the stand. Tomorrow, after the spackle dries, I will apply a wash of brown ink, do a little bit of tan dry brushing, and then glue on the static grass to finish off the base. The client has his own artillery pieces, but I plan to give him the five cannon shown in the picture to use or not use as he sees fit. I don't need the cannon anymore, so they are freebies for him. The artillery stands are 2" wide by 2.5" deep. Eventually there will be limbers to go with the guns. 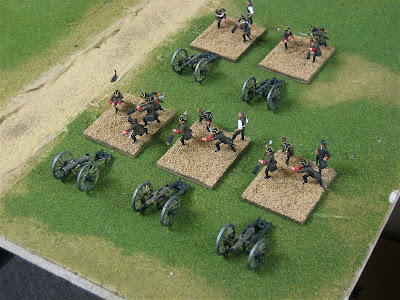 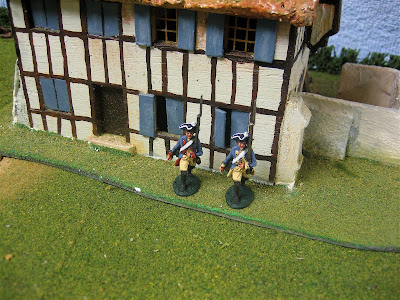 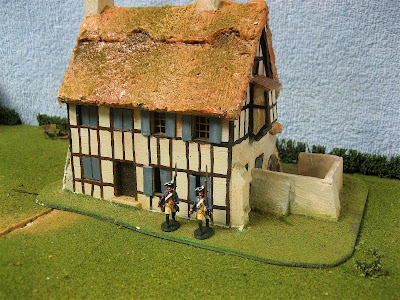 I will be working on the basing and painting of the Bayreuth Dragoons for the rest of the week. For my customer in Canada, your Prussians are finished and I hope to get them posted next saturday.

Yesterday, I took a little break from painting and basing figures to play in a French Foreign Legion skirmish game at Randy's house. It was a small game with four players and we had a great time. I will post some of the pictures this week along with some commentary on the game.