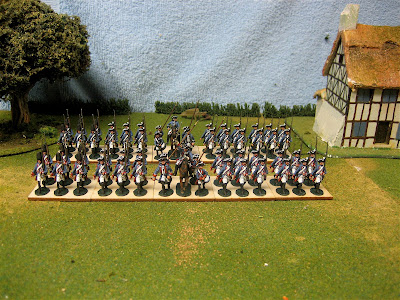 RSM Bavarians -- Regiment Herzog Clemens in the front row and the Leib Regiment in the second row. Click the pictures twice to enlarge the view.

I have been painting Bavarians over the past couple of weeks for a commission that I received and I thought that I would post some pictures of the battalions in their finished state, sans basing. The figures are the RSM Seven Years War Austrians that have been "converted with paint" into Bavarians.

Update: I used Reaper Pro Paint #18013 "Night Sky" as the base shade color for the Bavarian coats. The I did a subtle highlight with Ral Partha/IWM #77-919 Dragon Scale Blue. This later color is no longer made, but you could add a drop of white to the Night Sky to get a highlight. I only use two different tones of the basic color, rather than three colors.

The client requested that I paint the Leib Regiment with its distinctive black facings and also the Herzog Clemens Regiment with red facings. He will provide his own flags from Vaubanner Graphics, so I just provided a painted staff without a flag.

The next step will be to apply the spackle compound to the bases and dip them into a pot of fine gravel from Gale Force 9 or Games Workshop. After the mixture dries overnight, I will then finish them off with a wash of brown ink - let that dry, then dry brush some tan over the base and then add the static grass to finish off the bases. 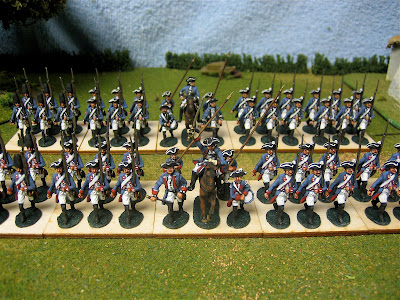 A closer view of the command stands, consisting of one mounted officer, two standard bearers, an officer on foot and one drummer. 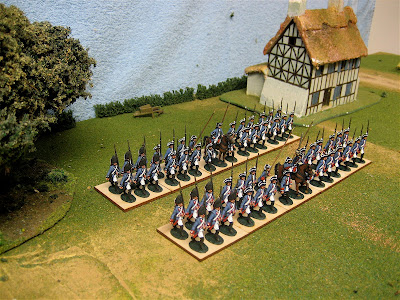 Another view of the Bavarian brigade from the side angle. Note the grenadiers in fur busbies on the right flank of each battalion (as the battalion faces forward).

The Bavarian commission has been a fun project to work on, because I can actually paint Austrian figures, but cover them in a more interesting light blue color, rather than boring Austrian white. I particularly like the way that the grenadier figures turned out. Each battalion has four stands of musketeers in tricorn hats and one stand wearing bearskin hats, with red bags and trimmed in white around the edges.

All that we need now are a couple of Bavarian battalion guns (3 pounders) with Bavarian crew and perhaps a mounted officer command stand to take charge of the brigade.

For anyone else interested in adding some RSM units to your army, I am still offering painted figures at a price of $6.00 per figure, including the figure, for your commission. I can do conventional SYW armies or even imagination regiments, as you desire. This offer stands as long as I still have plenty of unpainted RSM figures to paint.