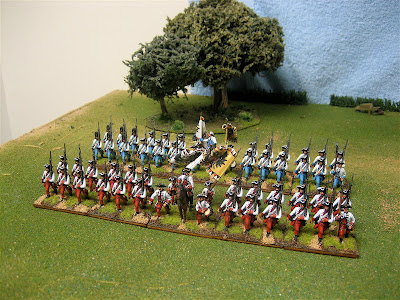 I finished painting and basing two 30-figure battalions of RSM Hungarians for the Seven Years War, over the weekend. These are headed to Florida as they are part of a painting commission that I received recently. I finished the red trouser clad Joseph Esterhazy regiment this week, loggin in a couple of late night - early morning painting sessions in order to get them ready for photographing for my Sunday evening blog.

The RSM Hungarians were sculpted by Chris Adkins, during the period that the company was owned by several individuals in Lexington, Kentucky. Chris did not paint Hungarian officers, NCOs, drummer or standard bearers, so I had to make do with RSM Austrians that I converted with paint. By this, I mean that I might use an Austrian officer, but paint his trousers red (including his gaitors) and paint on some black boots etc. The effect turns out very well, I think, although for the purists, you might consider ordering Minden Hungarian command personnel to finish off your battalions. 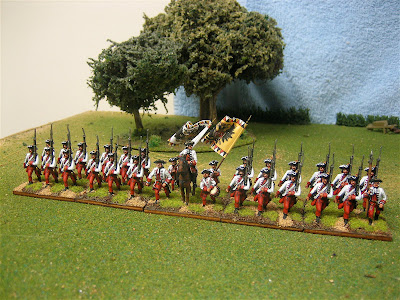 A closer view of the Joseph Esterhazy regiment. Flags are from GMB Designs. 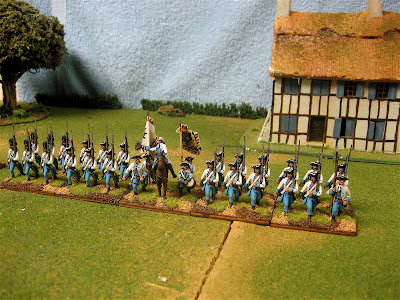 A closer view of the Haller regiment. 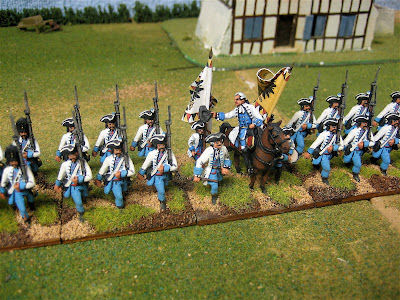 A close-up shot of the mounted colonel of the Haller regiment. This is the RSM French General, leaning back and doffing his tricorn to his troops. I like the way that this mounted figure turned out - one of my favorites.

I had posted some pictures of two Bavarian battalions several days ago, but the bases had not been finished. So here is how they look with the bases terrained with spackle compound, fine grit from Games Workshop or Gale Force 9, a little bit of brown ink, and static grass to complete the effect. These figures will be shipping out to the same destination as the Hungarian battalions. 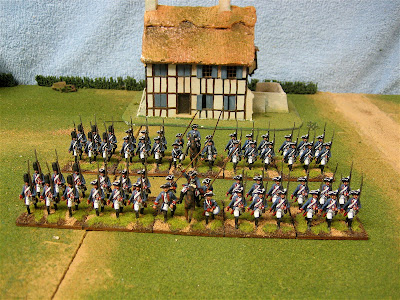 I still have a few odds and ends left to paint for other people, but then I plan to get back and paint a few more Austrian units for my own Minden Project armies. The plan is to have both sides, Austrian and Prussian, done in time for the SYW Association Convention in March 2011, so that I can host several games feature all-Minden figure armies. Time is running out, even though there are 5-6 months before the convention.

I might do a small SYW game at the Legends of the Fall convention on November 20, 2010 in Mundelein, Illinois. I want to fit the game into a three hour time slot, so I don't need the full army roster to put on this game. It will be more of a dress rehearsal for the SYWA convention.

By the way, the Chicago Bears looked downright awesome in crushing the Dallas Cowboys in football today, 27-20. The game was not as close as the final score would seem to indicate, as the Bears had the game well in hand with a strong defensive effort and a stellar aeriel attack led by Jay Cutler. I know that The Grimsby Wargamer in the UK is also pleased with the game's outcome. 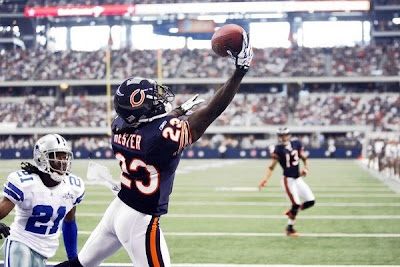 Devin Hester makes an athletic touchdown catch in the Bears 27-20 victory over the Dallas Cowboys, in Dallas today. Photo from the Chicago Tribune.