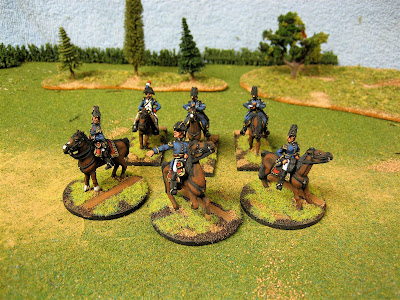 General de Division Gudin (center) and his staff including Generals de Brigade Petit (left) and Gautier (right) along with their aides de camp. Elite Miniatures figures. Click the pix to enlarge the view.

I have been spending the last several days working on the command figures and staff officers for my 1806 French and Prussian armies. I had set up all of my forces on my wargame table so that I could see how they look all at one time. This also highlights what is missing and what needs to be painted next. After doing this exercise, it was clear to me that I needed to paint an aide de camp for each officer.

My basing system uses a round base for the division and brigade commanders and a rectangular base for the staff. This way, when I look at the figures on the table, I can instantly pick out the Big Kahuna from the staff at a glance. The long pieces of wood that you see on each stand is where I will glue on the name tag for the particular general. The ID tags will be printed out in a nice looking font and glued to the wooden placque with white glue. 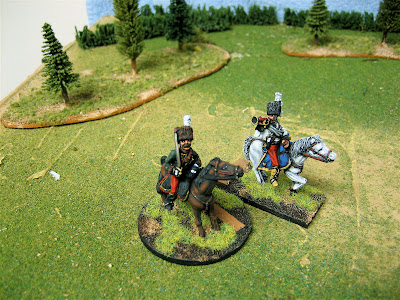 Eventually, I will have Gudin's 3rd division of eight battalions of 72 figures, one division battery of foot artillery, and to cap it off, the corps' light cavalry brigade. This was commanded by Vialannes, who was not viewed positively by Davout and later transferred out of the corps. I may change history a little bit and promote Colonel Exelmans of the 1er Chasseurs a Cheval to the command of the light cavalry brigade. The brigade will consist of the 1er, 2eme and 12eme regiments of chasseurs plus one battery of horse artillery.
I will post pictures of the Prussian general staff tomorrow. I am also working on additional artillery crews for both the French and the Prussians and hope to be able to post some pictures of the larger batteries within a few days.
Posted by Der Alte Fritz at 11:28 PM