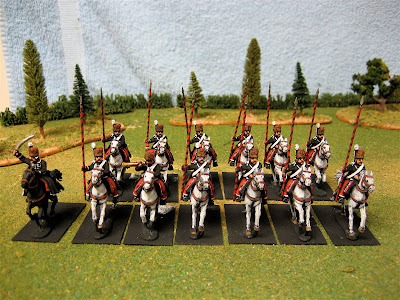 
I completed the squadron of Bosniak lancers this evening and thought that I would post some pictures, even though I have not done the basing yet. That will be done tomorrow. The most difficult and tedious part was painting the white edging on the "van dyke" pattern of the shabraque, closely followed by the chore of painting the black "barbershop pole stripe" on the lances. I will eventually add some lance pennons as well, although I haven't decided whether to make them freehand or use some of the GMB Designs pennons. 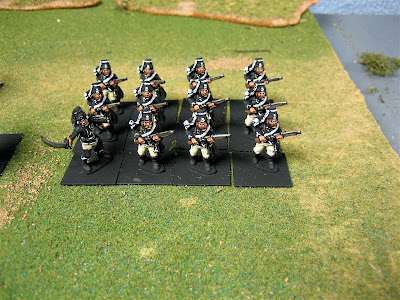 Over the long holiday weekend, I whipped out the dozen dismounted Black Hussars in about a day. What the heck, they are mostly black and have a minimal amount of equipment plus there is no design on the sabertache. Now that's my kind of uniform!!!!

Next on the painting docket: 18 dismounted von Kliest horse grenadiers to use in our upcoming Light Troop game on saturday December 5, 2009. Given that this is the anniversary of Leuthen, that must be a good omen for Prussian fortunes in our upcoming game. 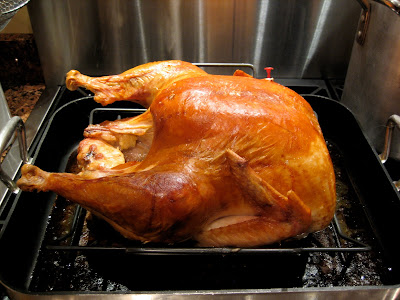 
And speaking of Thanksgiving, you can see what our bird looked like as we took it out of the oven. I was impressed with the golden brown color of the skin so I just had to take a picture. I was going to post it on Thanksgiving Day, but with a dozen guests over for dinner, I got a bit distracted and didn't get around to posting the picture until today.
Posted by Der Alte Fritz at 10:38 PM