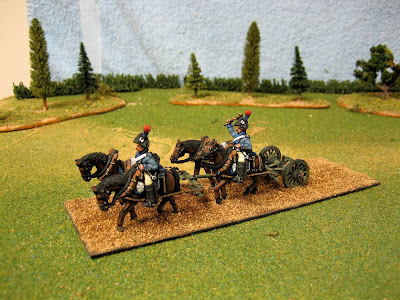 I finished my first of eight French artillery limber teams that I purchased from Front Rank Miniatures about a month ago. I started Friday night and finished the team (7 Olley Painting Points) on Saturday afternoon and started the basing process, which takes several steps. Here you can see the semi-finished product before I apply a coating of brown ink on the base, dry brush some tan paint, and then apply the static grass.

I used some sheets of polystyrene that were laying about the workshop and cut them to a dimension of 7 inches long by 2-1/4 inches wide so that I would have enough extra space to attach an artillery piece to the limber. I do not glue my cannons and crew to a single stand, but rather keep the cannon standing free without a base and I put the crewmen on 3/4 inch square metal bases, finished off with spackle compound, paint and flock. So when it is time to move the gun model, I can simply attach it to the limber and take off! 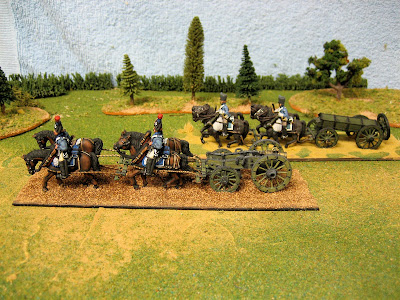 Here is the Front Rank limber with an Elite Miniatures French howitzer hooked up for a ride. In the background, you can see either a Dixon or Essex (I can't recall which of the two made it) French caisson team.

It seemed a rather daunting task to assemble all of the parts for painting and then carefully glue them onto the plastic base, but the whole process turned out easier than I had imagined it to be. I went back and forth in my mind as to whether I might want to use only two horses and one rider, or go with the four horse and two rider team. However, after painting the whole team and finding it relatively easy to affix to the base system, I have decided to go with the full four horse team. Each one of my French guns will have a similar limber. The battery will be comprised of six gun models (2 howitzers and 4 8-pounders), their respective limbers, and one ammunition caisson team. 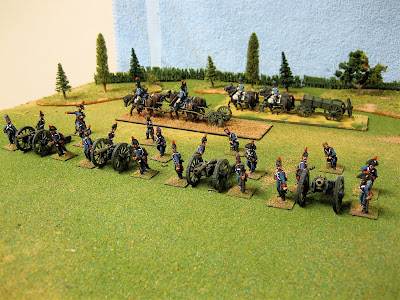 Four of the six guns that will make up one of my French line artillery batteries.

So there you have it - the start of the limber building process. I was afraid to tackle this project, but as is so often the case, once you start on a project, it is not as difficult as you might have imagined it to be. I am currently cleaning and getting two more limber teams ready for the primer and hopefully should have them finished by the end of this coming week. The French artillery battery should look downright awesome once all of its elements are in place: guns, crew, battery officer and ADC, limber teams and caissons.