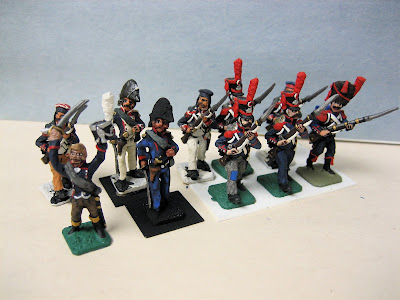 An assortment of Connoisseur French grenadiers and one Bicorne Carabinier in bearskin. Most of these were painted by Dennis Smail about 15 years ago. I painted the officer in the blue trousers in the front row.

Today on TMP several people were inquiring about Connoisseur Miniatures and wondered what they looked like and how they might compare to newer 28mm ranges of Napoleonic figures. Given the general lack of pictures on the internet, I rushed home and dug out a few "remainders " that I still had laying around the Closet O' Lead in my basement. I thought that everyone might want to take a closer look at these venerable old figures. 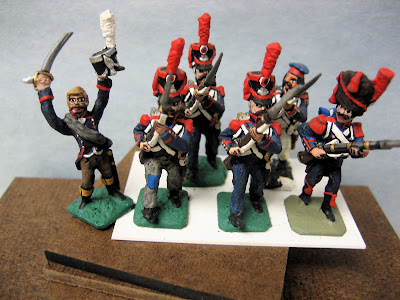 Another view of the same grouping of figures. 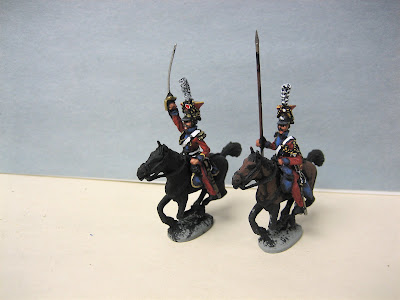 Guard Dutch Lancers in French service, partially painted and never finished. I may have to finish this group of figures to do them justice.

I sold nearly all of my 25/28mm Napoleonics several years ago, but I still had a few extra castings sitting around in the "bits box" of miscellaneous lead figures. These Connoisseur Dutch Lancers were going to be in my defunct Waterloo Project. My painting style has changed a little bit, so I may go back and touch them up and finish them off, now that I'm a little bit motivated to do so. 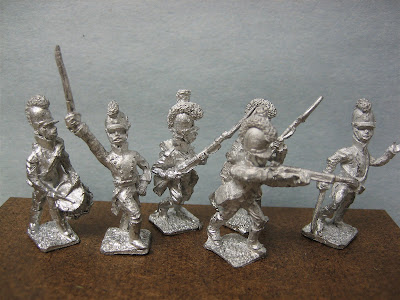 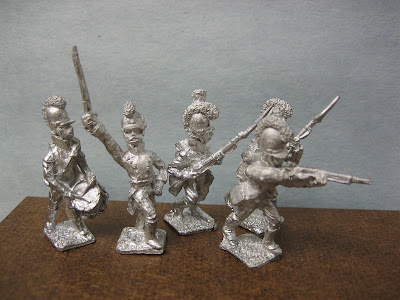 The unpainted figures shown above are from the Connoisseur range of Bavarians during the Napoleonic wars. These are suitable for 1809 to 1814. They also have light cavalry and artillery (I'm not sure about the artillery crew, but I think they were made). I rather like the Bavarians and think that they would fit in nicely with my Elite Miniatures 1805-07 French. Perhaps one day I will paint a brigade of these lads. They look nice to me.
Posted by Der Alte Fritz at 8:30 PM