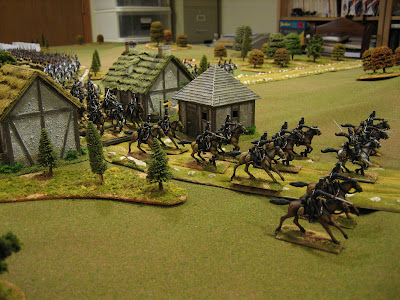 Black Hussars see Gallian light cavalry and charge out of the town of Gruningen in pursuit.


After the little scare at Alsfeld, Colonel Bauer of the Black Hussars was a bit on edge as he moved southwest to cross the Ohm River and secure a forward base at Grunberg. A roll of the dice determined that nothing unusual happened that day, so Bauer's task force rode into Grunberg without opposition. Since this was Day 2, a roll of 2 or less on one D6 would result in some kind of action or sighting of Gallian light troops.

A Short Geography Lesson
I don't know how to load maps into this blog, so bear with me as I describe the terrain over which this reconnaissance patrol is taking place. Picture, if you will, a four-sided diamond tipped on its side. The right most tip of the diamond is Fulda, where the Erbprinz Friedrich's army is stationed. Yes, this is the famous Fulda Gap where the Germanian army has been fending off the Gallians for over a year. At the left most tip of the diamond is the free city of Frankfurt. However, the Gallians have ensconced themselves in the town, uninvited of course, and have set up their forward base of operations for the campaign in western Germania. So Frankfurt Am Main is very important to the Gallian army.

In the middle of the diamond, one finds the mountain ridge known as the Vogelsberg. It is impassable, but patrols could probably scale its heights and use it as an observation point. The bottom part of the diamond is the main road from Fulda to Frankfurt. The upper part of the diamond is the longer route to Frankfurt. An army passing through here would have to cross several rivers along the way: the Schwaim and the Ohm and eventually the Neida, which flows forth from the Vogelsberg. However, this route is closer to Hesse Kasel which sort of provides protection for the right flank of any army traveling this route towards Frankfurt.

Day Three: action at Gruningen
I rolled a 2 on the D6 so that meant that Bauer was finally going to run into Gallian patrols today. What would he see? A roll of 1-2 (cavalry), 3-4 (infantry) or 5-6 (both infantry and cavalry) on the olde D6 would decide the outcome. I rolled a 5, so both infantry and cavalry appeared on the table. I then rolled a D6 for each type of troop to see how many would appear. Odd resulted in one unit and Even resulted in two units. I rolled Odd for both so only one unit of light infantry (Chasseurs de Fischer) and one unit of hussars (Horvath Hussars) arrived on the table for the Gallians. 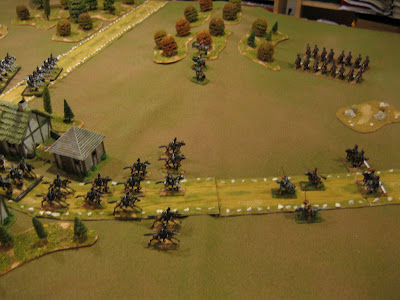 Sorry about the blurry picture, but it is the only one that I have that depicts the ambush that the Gallian light troops set up for the Germanians.


The Gallians were vastly outnumbered and had no intention of trying to fight it out against the Germanians. However, they did decide that an ambush was highly feasible in this situation. If you look at the blurry picture above, you can visualize how the ambush was set up. First, the Gallians sent a troop of irregular lancers up the road towards Gruningen to act as the bait for the trap. They were to lure the aggressive Germanians into a charge and then turn tail to the rear. Outside of the town, a ridge provided terrific cover for two squadrons of Horvath Hussars. The hussars were to wait until the Germanians chased the irregulars down the road and then they would charge them in the flank. To make things even tougher, half a company of Fischer Chasseurs hid themselves in the wooded area on the ridge, providing flank protection for the Horvath Hussars. The other company of chasseurs deployed in a woods that was at the bottom of the picture above (not shown). They would be in position to fire into the flank of the Germanians as they galloped down the road. 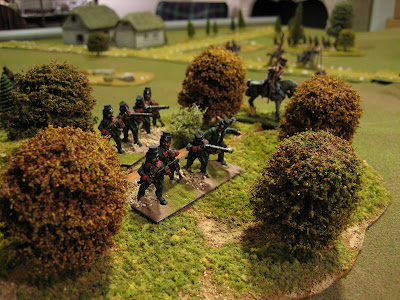 Chasseurs de Fischer from Front Rank Miniatures deploy in the woods north of the town and prepare to shoot into the flank of any passing Germanian troops. 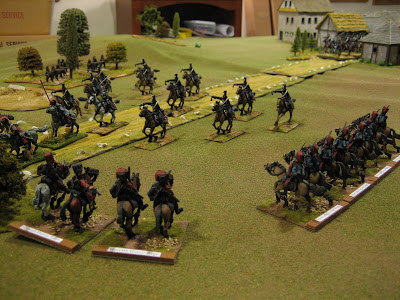 The ambush is sprung: the first squadron of the Black Hussars chase the irregular lancers down the road. Then the Horvath Hussars charge from behind the ridge and hit the Germanian hussars in the flank. Foot chasseurs in the woods beyond pepper the Germanians with musket fire. 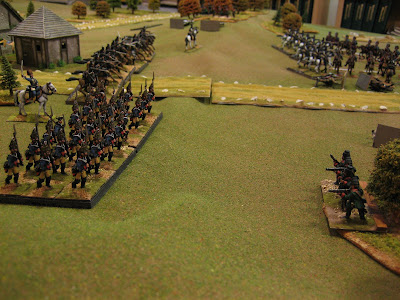 Germanian grenadiers move forward to take out the Gallian light infantry, who are forced to fall back. The supporting 2nd (white horses) and 3rd squadrons of the Black Hussars arrive and add their weight to the attack, causing the Horvath Hussars to fall back. 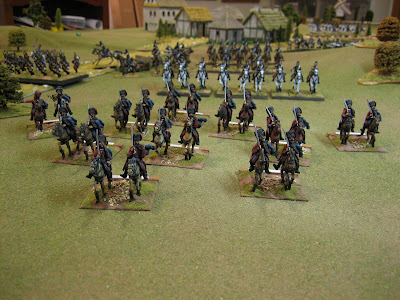 The Horvath Hussars retire from the field. They have done their job in delaying the Germanians and now it is time to bring their intelligence back to their own encampment.


The first squadron, von Arnim's, was chopped up rather nicely. It was fired on from one flank and charged into their right by the Horvath Hussars. The second squadron (white horses) rode up to assist their comrades and they lost a few troopers from the musketry of the Chasseurs de Fischer, hidden in the woods on the hill.


Once Bauer realized the extent of the ambush, he hurried up his grenadier battalion, sending half to the left and half to the right in order to root out the Gallian light infantry. The Chasseurs de Fischer were outnumbered and so they retired back into the woods and hills to avoid the Germanian cavalry. With the flanks secured by the grenadiers, Bauer then sent the third squadron of Black hussars forward into the cavalry fight. He held back the two squadrons of Zieten (Blue) hussars in Gruningen as a reserve, but they were not needed. His Gallian counterpart realized that he could do no more on this battleground, so the order was issued to retire and fall back towards Friedberg, on the road to Frankfurt, to report the presence of the Germanian light cavalry.
Posted by Der Alte Fritz at 12:23 AM