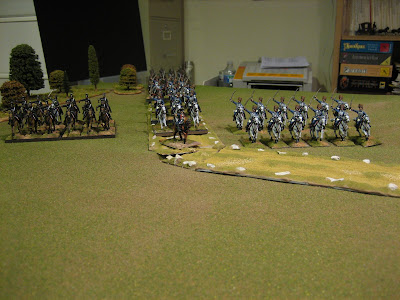 
The little action at Gruningen yesterday left no doubt in Colonel Bauer's mind that he had bumped into the French cavalry screen that was fanned out northeast of Frankfurt Am Main. It was also clear to him that the French were now aware of the Prussian presence in the area and that the going was due to get tougher in the coming days.

Colonel Bauer had two choices: head north to destroy the French magazine at Geissen on the Lahn River, or continue south towards Frankfurt, via Munzenberg and Freiberg. Since Geissen was a walled town, the odds of taking it without an escalade were deemed to be remote, so Bauer ordered his advance guard to move towards Munzenberg.

The Horvath Hussars had retreated back towards Frankfurt after their ambush and when they rode through Munzenberg, they gave warning to the local French commandant that Prussian light troops were nearby. Accordingly, Colonel Chalfont of the Belsunce Regiment put his regiment on the alert for a Prussian attack. He deployed his single battalion of regular infantry in front of Munzenberg and covered his left flank with some light infantry from the Clermont-Prince regiment. The town protected his right flank. Several companies of Chasseurs de Fischer occuppied the town and the Horvath Hussars were posted behind the town in order to cover the escape route to Freiberg.

There was a cloud of dust upon the road from Gruningen and a flock of birds took flight as 600 sets of hooves pounded upon the dirt track. This is what Colonel Chalfont saw (see the picture above, and please click the pix to enlarge the view). Did Chalfont have enough troops to stop this Prussian raid, or would he have to retreat to Freiberg? Find out tomorrow.
Posted by Der Alte Fritz at 11:59 PM