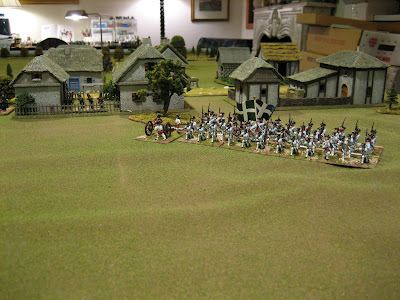 French regiment Belsunce deployed in 4 ranks. This is actually two 24-figure French battalions (RSM and Old Glory) that I put together to form one larger BAR-sized battalion for this encounter. Click the pix to enlarge the view.


As the Prussian vanguard emerged from the Grueningen road, they fanned out onto the plain in front of Munzenberg. Three squadrons of hussars led the way, forming a line of battle. Behind them was a 600 man battalion of the Heyden Grenadiers (19/25). Bauer also deployed a battery of horse artillery on a low rise to the left of the road, where they could be best employed to rain shell into the battalion of French infantry that he espied in front of the town.

The following picture provides the reader with an overview of the Prussian and French deployment around the town of Munzenberg. 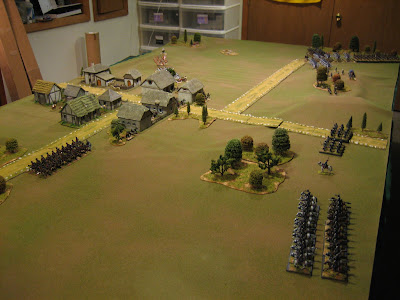 Overview of the battle deployment. French light infantry are deployed in the town; the Horvath Hussars protect the road to Friedberg; the Belsunce regiment and the Clermont-Prince light infantry deploy north of the town. The Prussians are entering the table from the top right corner, with a secondary force arriving in the middle, in order to cut off the French retreat.

Colonel Bauer contemplated the situation before him and thought about it in the context of his general orders (which were to push the Prussian cavalry screen forward and push back the French forward light troops). He was to avoid battle if at all possible in order to maintain secrecy. However, it was clear that his cover was blown after yesterday's kleine krieg action and undoubtedly word of the Prussian presence so close to Frankfurt was on its way to Marshal de Broglie.

Accordingly, Bauer sent two squadrons of Black Hussars around the south flank of the village in hopes that they could pose a threat to the main road back to Friedberg. A squadron of dismounted hussars was also detached to this group to provide some protection from any French light infantry that might be prowling around through the little woods that lay in front of the town. The two squadrons of hussars deployed into a two rank line of battle and began to advance towards the two squadrons of French hussars that guarded the line of retreat.

At the same time, a battery of two 6-pound horse artillery dropped trail on a small rise in front of the town and prepared to fire on the French Belsunce regiment. A second squadron of dismounted hussars advanced towards the ridge to the north of the town in order to outflank the Belsunce regiment and stir up any light infantry that might be hiding behind the hill. While the Prussians seeped around the French flanks, Bauer would bombard the French infantry and deploy the Heyden Grenadier battalion to the front. They would wait until things developed on the two French flanks.

Now then, what was Colonel Chalfont to do? And what would you do if you were in Chalfont's shoes? Please feel free to leave your ideas in the commentary section of this blog.

A note about the French Belsunce Regiment: this is comprised of two 24-figure battalions of French that I use for my own "Alter Fritz" rules at a 1 to 30 ratio. The front two ranks are an RSM unit and the back two ranks and the battalion gun are Old Glory figures. The Clermont-Prince light infantry and the Chasseurs de Fischer are from Front Rank. I am tempted to fight a couple of these battles with 24 man units and the BAR rules just to prove that it can be done.
Posted by Der Alte Fritz at 11:30 PM