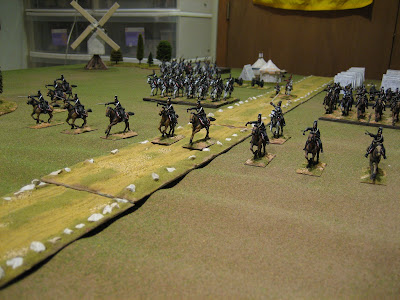 A vedette of Black Hussars leads the patrol into Gallian territory. Note the formed squadrons in the second rank providing support to the first squadron, which has deployed into open order to lead the advance.


The Erbprinz Friedrich has assembled his general staff at Schloss Seewaldt and plans are afoot for the new Autumn campaign into Gallian held territory within the Empire. The objective is the liberation of Frankfurt am Main from Gallian occupation. The capture of Frankfurt would be a severe blow to the Gallian war effort, as it is their most important base of supply and operations in the Empire.

With that objective in mind, the Erbprinz has ordered General von Zieten to throw out a heavy cavalry screen between Fulda (in Hesse Seewald territory) and Frankfurt. The Germanian army's light cavalry contingent outnumbers that of the Gallians, so the cavalry screen should be of sufficient size and depth to keep the Gallians away from the forward areas where the Germanian army will assemble. Hmm, thinks the Erbprinz, maybe next time the Gallians will spend more time painting light cavalry instead of devoting all of their painting resources to cannons and cuirassiers. Serves them right.

The heavy Germanian cavalry screen is designed to attract the attention of the Gallian army that defends the approaches to Frankfurt via the Fulda gap. This has been the main avenue of invasion by both armies, so it should not surprise the Gallians when they see increased light infantry and cavalry operating in this sector. 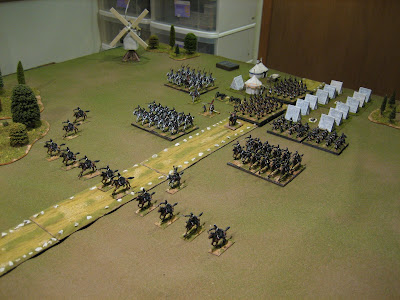 While von Zieten is carrying out his duties, a second cavalry screen, under the command of Colonel Bauer of the Black Hussars, has been ordered to strike west from Hersfeld (on the Fulda River) to Ziegenhain. There it will cross the Schwalm and proceed to Kirchhain on the Ohm. This will position the advance guard to move on to its eventual objective, which I can not disclose at this point.
Posted by Der Alte Fritz at 12:21 AM