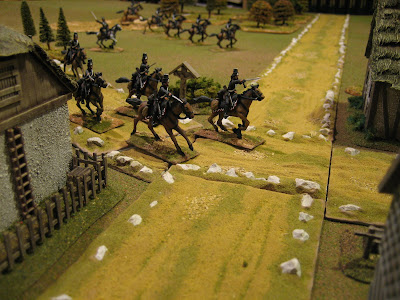 The first troop/first squadron of HR5 gallops into Alsfeld hoping to surprise any enemy pickets that might be in the town. Stadden figures, HG Walls buildings, and Alte Fritz constructed road sections.

Colonel Bauer's advance guard departed from its base in Hersfeld yesterday and rode southwest in the direction of Alsfeld, on the Schwalm River. His force consisted of 3 squadrons of his own Black Hussars (HR5), 2 squadrons of the Zieten Hussars (HR2), 2 six-pound horse artillery guns, and the Heyden Grenadier Battalion (19/25).

Once the task force crossed the river, they would be leaving the friendly territory of the Landgraf of Hesse Kassel. Alsfeld is approximately 20 miles from Bauer's starting point and represented a full day's march for Bauer's little force. One would think that such a force could march faster, but the inclusion of the infantry would slow things down a little bit. That was all right to Bauer's way of thinking, because he did not want to attract attention to his little enterprise. He wanted the French to focus on the main cavalry screen that was fanning out from Fulda in the direction of Hanau and Frankfurt.

As Bauer's band approached Alsfeld, he directed the two squadrons of Zieten Hussars to head up river to a ford where they would cross the river and circle around behind the village of Alsfeld while his main body crossed the river at the town. Once Bauer was certain that the Zieten Hussars had crossed, he gave a nod to Captain von Arnim (commander of the first squadron), who then directed one troop of his squadron to gallop through the center of town while the second troop worked its way around the flank. If there were any enemy pickets in the town, then they would be caught in the three-pronged vice that was closing around the village.

The first troop spurred their horses forward and as they galloped into the town, a shot rang out out! What had happened? Stay tuned tomorrow for the rest of the story.
Posted by Der Alte Fritz at 12:12 AM