The Elements of Fredrician Warfare 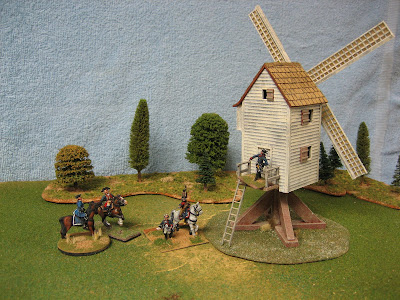 Frederick II making a personal reconnaissance of the Austrian position, taking advantage of the height offered by a local windmill. Figures are (left to right) Elite, Front Rank, a stand of Old Glory figures and the Suren Frederick atop the windmill (built by Herb Gundt).


The traditional form of warfare, prior to the ascencion of Frederick II to the Prussian throne, was for two armies to line up their forces, parallel to each other, wih cavalry protecting the flanks, and then blazing away with muskets and cannons until one side quit the battlefield. Frederick was looking for something more decisive and economical; some tactical innovation that could take advantage of the Prussian army's superiority in speed and maneuverability. Frederick realized that once the fighting began, effective command and control of the army ceased to exist.

Frederick developed and refined the Oblique Order, which in essence was the tactic of attacking the enemy's flank with overwhelming local forces, while refusing, or holding back, the other wing of his army in order to pin the enemy in place. In theory, the Oblique Order enabled Frederick to fight battles with his smaller army (vis-a-vis the size of the Austrians and Russians) by exploiting his advantage of speed on the march to hit the enemy flank with larger number of Prussian, while negating the overall numbers advantage that his enemies had. 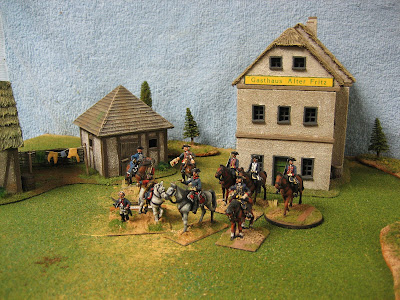 Frederick outlines his battle plan to his senior generals prior to the battle. Usually this was done from an elevated vantage point, such as a hilltop or even the second floor of a building, such as the Gasthaus Alter Fritz (modeled by Herb Gundt after an actual building in the town of Hochkirch).

The elements of the Oblique Order were as follows:

{1} The march to the enemy's flank or rear. Woods (Zorndorf, Kunersdorf, Torgau), hills (Rossbach and Leuthen) or darkness might be used to screen the march from the enemy. At Prague and Kolin, the march was done in full view of the Austrians;

{3} The battle plan is communicated to the senior commanders in the army. After making his recon and formulating a battle plan in his mind, Frederick would gather his senior officers together at some convenient viewpoint, and express his ideas in general terms. He left it up to the generals to develop the details and the execution. The following briefing that was given prior to Kolin serves as an example of how this was done.

"We must confine our attack to the enemy right flank, where they can oppose us on a frontage of only six or eight battalions. We march until our left wing reaches the Kolin stream, and then we proceed to roll up the enemy line and throw their right flank into their left, so that it will either end up in the marsh or they lay down their arms. Our right wing must be held back so that if possible it does not hear a single enemy cannon shot, let alone sustain any casualties.

Look gentlemen, over there on the left you can see that large building or granary! Next to it is a little village and some ponds, and that's where our right wing must come to rest. If for any reason it has to move further to the left, when our left wing attacks, it mus still hold back, as I have just said. Gentlemen, if you do not understand I ask you to say so. I will not take it amiss, and I will be happy to go over the plan again."
{4} An advance force leads the way. An advance guard of light troops and cavalry, or in some cases a division, such as Hulsen's at Kolin, was employed to clear the way, deceive the enemy (ex. Leuthen) or spearhead the attack.

{5} The main attack is launched. The attacking wing of the army had now marched into its designated position to attack one of the enemy's flanks or rear. The advance guard would hit the targeted flank, followed by one or more lines of infantry and cavalry. At Rossbach and Leuthen, Frederick had the attacking wing of the army deployed in a staggered echelon formation with each regiment or battalion some 20 to 50 paces behind its neighboring regiment. This tweak in the Oblique Order was made in order to ensure that elements of the army did not attack across a broad frontage, as had happened at Kolin.

{6} The refused flank. The rest of the army was held back from the battle (Driessen's cavalry wing at Leuthen, Dohna's right wing at Zorndorf, Finck's command at Kunersdorf, etc.) so as to "fix" the enemy in their position and to provide a reserve which Frederick could use to exploit success or cover a retreat in the event of a defeat.

Despite all of the good intentions and the best layed plans for battle, once the army began its minuet of maneuver and engaged the enemy, it was difficult for any general, even Frederick, to exercise command and control over the events that followed. His confidant, Henri de Catt recorded this exchange after the battle of Zorndorf in 1758.

Frederick: That was a hell of a day. Did you understand what was going on?

Catt: Your Majesty, I had a good grasp of the preliminary march and the first arrangements for the battle. But all the rest escapes me. I could make no sense of the various movements.