Return to the Sudan 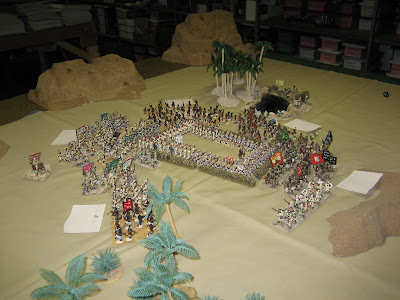 A British and Egyptian square stand fast behind their zariba as they attempt to hold off hoards of Dervish and Hadendawa aherants of The Mahdi. All figures are Connoisseur Miniatures from the collection of Keith Leidy.


On Saturday February 8, 2008 I had the pleasure of taking part in a Sudan game hosted by Keith Leidy. Messers Protz and Frye accompanied me in our trek through the desert as we sought to occupy and protect the oasis at Dur Es El Bubba. We had not played a Sudan game in over a year, so we all felt that it was high time to bring the figures out onto the table and give the Peter Gilder Sudan rules another workout. The rules worked smoothly and our memories of how to work through the "shadowing of the Imperial forces" and the melee procedures were sufficient to make the game run like clockwork.


One of the things that we discovered was that placing the Imperial troops behind prepared defenses (the zariba) made it difficult for the Mahdist forces to build up enough gumption for an attack. They spent a good part of the game "shadowing", i.e. staying within eyesight of the Imperial forces, but outside of small arms range. We also came to the realization that the Queen's forces had to win the first round of melee and repulse the Mahdists, a high probability, or face certain destruction in the subsequent rounds of melee against overwhelming numbers. The native forces fight until they are beaten in a given round of melee. There are no morale checks otherwise.


It was a fun game and quite a treat to be able to push Keith's excellent Connoisseur figures across the desert sands. I will present a detailed battle report tomorrow, but for now, here are a few taster pictures of the action. 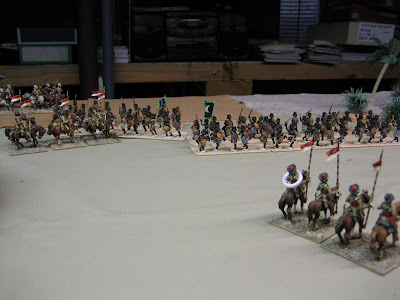 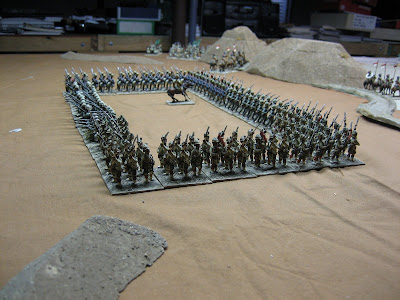 Der Alte Fritz's brigade square forms up to fend off a Dervish cavalry attack early in the game. 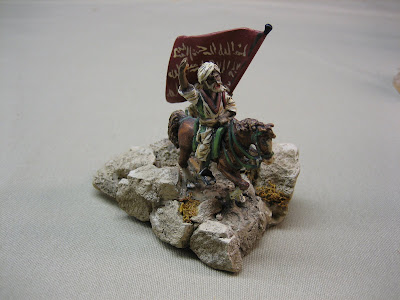 A close up picture of the Dervish Emir, depicting the modelling skills of the late Peter Gilder, who sculpted, painted and based the figures. An interesting use of terrain materials.

As always, please click on the pictures for the enlarged view of these fabulous figures. And drop on in tomorrow to read the after action report.
Posted by Der Alte Fritz at 11:32 PM