Austrian Battalion Strength in the SYW 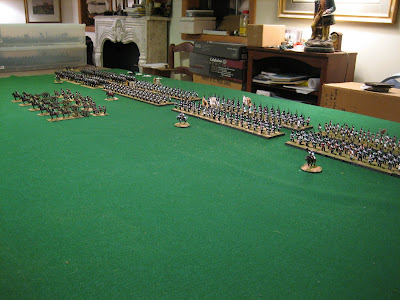 Grand Review of the Austrian Army done in early December 2007


Someone on the Old School Wargamers' group was asking about the size of Austrian battalions during the Seven Years War and naturally, I became a bit curious about finding the truth. I have heard everything from a low of some 500 men to as high as 900.


Let's begin by looking at some of the few source books in English, primarily those written by Professor Christopher Duffy, as well as some information from the Pengel & Hurt series. Things are complicated by the fact that the Austrians changed the size of their infantry regiments in 1740, 1748 and again in 1756, just before the outbreak of the SYW. I will focus on the organization as of 1756 since our interest is in the Seven Years War.

The company establishment included 44 other officers, NCOs, corporals, drummers and clerks. This number (44) includes 25 "gefreiten" and I am wondering if this may be a typo. Multiplying these company extras by 6 companies adds another 264 extras to the battalion. So I'm thinking that this number is overstated bigtime, because that would increase the battalion to 1,044 on the low end and 1,224 men on the high end. Then add 23 regimental staff for the two field battalions and you end up with, well... a lot of guys in white coats.

Duffy says that there are 4 different measures of the regimental and battalion strength over the course of the SYW. The first method is called the Completter Stand, or the paper strength as if the regiment was staffed up to its establishment. The second method is called the Effectiver Stand and measures the actual numbers present in a theatre of war overall (presumably deducting the depot battalion and any regimental staff taking up cosy quarters at the depot). The third measure is called the Loco Stand, or the number of men physically present at individual locations, excluding men who are absent for various reasons. And finally, there is the Dienstbarer Stand, or the numbers from the Loco Stand actually capable of doing service (excluding sick and wounded, etc.).

Duffy uses information from the muster lists, which correspond to the Loco Stand, and estimates that the average regiment (German) has 1,734 officers and rank and file. Assuming two battalions, this works out to 867 men of all ranks; or if we deduct the 98 noncombatants per regiment, then it averages out to 1,636 men or 818 per battalion. On the other hand, if Duffy is counting the third battalion back at the depot, then the numbers will be much lower since we are spreading them over 3 battalions instead of 2 battalions. The 1,636 men in 3 battalions becomes 548 men per battalion. Let us keep that number in mind.

Duffy then cites a study of the Austrian army made in the early 1790s by Lt-Colonel Gomez, who was trying to determine the relationship between the size of the army and its need for rations and transportation equipment, so he used statistical information from the SYW from the Austrian archives. Gomez did a Completter Stand analysis for each year of the SYW. For example, in 1758, Gomez estimates that there were 116,116 German fusiliers in 816 fusilier companies, or an average of 142 fusiliers per company in 1758. The average grenadier company was 104 men. The Dienstbarer Stand totals for this period are one-third less than the Completter Stand figures, so if we multiply all of the above numbers by 0.67 (ouch, math!), we derive an estimated field strength of around 570 men per battalion.

Field Marshall Lacy complained to Daun, in a letter dated June 17, 1759, that the authorities in Vienna held an inflated view of the number of actual combat troops in the field and supposed that an Austrian army to rival the size of Xerxes Persians must certainly crush, overwhelm and eradicate the King of Prussia from the face of the earth.

Duffy's Second Estimate
On pages 402 and 403 of Instrument of War, Duffy goes into some detail about the tactical operation of the battalion and its companies in battle. Here Duffy states that the battalion is organized into 4 "divisions" of 128 privates each. Multiplying that figure by 4 generates a rank and file battalion strength of 512 men. I am assuming that this figure excludes the officers, NCOs, etc. So we have to make an estimate of these "extras" and add them back in. Page 403 provides a diagram of a full division including rank and file and extras (of which there are 18 men). So 18 + 128 = 146 men of all ranks per division or 584 men in the whole battalion. I think that it is not unreasonable to add back another 16 officers at the battalion level to cover the senior officers of the battalion such as the Obrist, the Obrist-leutnant, the Obrist-wachtmeister, 2 standard bearers, some kadetten junior officers and a few musicians. The extra officers boosts our tallly up to 600 officers and men.

In his first book on the Austrian army (long out of print by now), Duffy indicates that the wartime establishment of the company varied from 130 to 160 men. I assume that the size differential relates back to the type of Stand that is being used. So if we use the smallest number, i.e. 130 and multiply it by 6 companies, we generate a battalion strength of 780 officers and men.

I believe that the Pengel & Hurt data is overstated, or at best, represents the Completter Stand or theoretical strength of the regiment and battalions of the German fusilier establishments. Duffy's original estimates in Army of Maria Theresa range from 780 to 960. The numbers are reduced to a low of 570 to 584 as a Dienstbarer Stand in the field while my own estimate brings the number closer to 600 officers and men. I think that it is highly unlikely that a battalion ever had 900 to 1,000 men on the battlefield, so I am more inclined to use 600 men as the estimate that I will use for my own miniature battalions. Hence, my Austrians will have 60 figures at a 1:10 ratio of figures to real men.
Posted by Der Alte Fritz at 11:54 PM