Der Alte Fritz is back 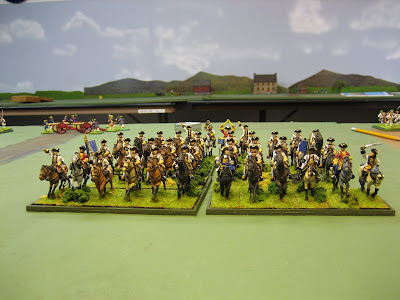 
I have felt a bit blogged out after the sudden flurry of Sudan activity a couple of weeks ago and so I've been taking a bit of a respite from the hobby to recharge my batteries, spend more time with the family, and generally try to get things back into balance. Another factor to my malaise may have been the extensive amount of 1806 Napoleonics that I have been painting during the first two months of 2008. They look nice, but Napoleonics seem to drain one's spirit away. Getting back to painting SYW figures ought to do wonders to improving my outlook.


We received another six inches of snow here in Hesse Seewald. I think that the latest delivery brings our total up to 60 inches for the year. I cannot wait until Spring! The usual remedy for cabin fever is to retreat to the basement and paint myself into a stupor until the snows begin to melt and the weather becomes tolerable.

To that end, I recently completed another 12 figure squadron of the Garde du Corps (CR13) in the Prussian army. The figures are Elite Miniatures Prussian cuirassiers and include one Foundry standard bearer carrying the Garde du Corps' distinctive vexilum style banner. I will post some pictures within a few days, after I get the bases terrained. They do look nice though and they are strong enough to handle that hoard of French cavalry pictured at the top of this page.

It now looks like I will be able to attend the Seven Years War Association Convention on both the friday and the saturday game days. Therefore, I have decided to run my own BAR game on friday, featuring my Austrians against my Prussians in a stylized version of the battle of Reichenberg in 1757. The prospect of a game may be the tonic for finally getting some more Austrian cavalry added to the army. I primed and black coated 12 Crusader Austrain cuirassiers this evening and should have these figures done in about a week (it helps to have the weekend coming up with respect to painting time).

I have another game coming up on March 8, 2008 at Brown Deer, WI - Chez Protz, if you will, and I suspect that the Garde du Corps will see some serious action in that game. I also ordered 36 Stadden AWI artillery crew - or enough for 5 or 6 crews. I intend to gradually replace my Foundry Prussian artillery crew with the taller and sleeker Stadden figures. Please refer to my earlier posting about the Stadden figures, back in January, for pictures of the same.