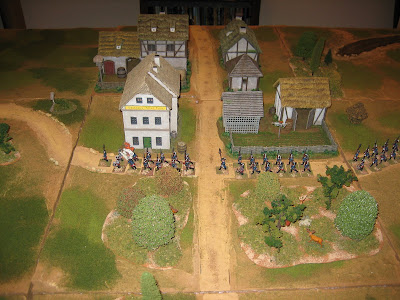 IR1 (Winterfeldt) march past the Gasthaus Alter Fritz (Old Glory figures painted by Der Alte Fritz) on their way into service with the Grand Duchy of Freiburg. Buildings by Herb Gundt, terrain boards by Der Alte Fritz and trees by K&M.


With much regret I had to put the Minden Miniatures on hold this evening so that I could complete the horses for the second squadron of Prussian cuirassier regiment CR13 - the Garde du Corps. The Garde du Corps was a 3-squadron regiment that usually fought along side the CR10 Gensdarmes regiment. I am using the Elite Miniatures SYW Prussian cuirassier castings for this regiment and have completed two 12 figure squadrons in time for the next battle, this coming Saturday December 1, 2007 in Brown Deer, Wisconsin, at Chez Protz. I will post pictures after I get the figures based and ready for battle.

It's looking like tomorrow night will be devoted to playing "catch up" with all of the figures that I've painted over the past month that need basing before this weekend's game. This lot includes the 24 Garde du Corps, 12 Zieten Hussars (previously photographed on these pages) and another surprise that I can't reveal just yet. Gallian spies may be monitoring this journal, so I don't want to give everything away at this time.

I dabbed a little more paint on the second batch of 30 Minden figures last night and so now most of the basic colors are blocked in, save for the muskets. I don't know why, but I really dislike painting muskets for some reason. It's probably due to the fact that I never seem to be able to paint a straight line down the musket barrel when I apply the pewter colored paint. I recall Hal Thinglum once declaring that he hated painting cross belts on British Colonials. I guess that we all have our own personal bete noires when it comes to painting likes and dislikes. Were it not for the weekend's game, I bet that I could complete the final 30 Minden figures by next Sunday. We shall see.

The picture shown above was taken back in 2006 and is posted for no other reason than the fact that I felt that I ought to post some kind of picture with today's posting. I never get tired of looking at the marvelous buildings that Herb Gundt has built for me. The "Gasthaus Alter Fritz" is based on the real thing, located in the village of Hochkirk just across the street from the famous church where the Margraf Karl (IR19) regiment held out against the Austrian hoards and bought time for the rest of the army to escape the trap that Marshal Daun devised to snare Frederick and his army on that fateful day in 1758.

The Prussian figures have been sold to the Grand Duchy of Freiburg (Randy Frye) so they are no longer a part of my army. They are Old Glory figures and I have to say that they are not all bad. It seems that everyone paints the Winterfeldt regiment if they are building a Prussian army, and I'm tempted to repaint it with either Potsdam Miniatures or Minden Miniatures, but then our group already has two other Winterfeldt batalions so maybe enough is enough.

This evening I was looking at the white board (dry erase) that I have near my basement painting table and notice some interesting items (at least they are to me). I post the dates and locations of our group's wargames as well as a running total of Olley Painting Points year to date. We have played 13 wargames this year and so next weekend's battle will be the fourteenth of the year. That's a lot of wargaming, I guess. The game tally includes some of the convention games that we ran at the SYWA convention, Little Wars, the Big Game and Rock Con.

As for Olley Painting Points, I am up to 1,053 points as of today. The system, devised by Phil Olley of Old School Wargaming fame, is an easy way to keep track of one's production. An infantry figure or artillery casting count as one point, and cavalry figures count as two points (since it consists of a horse and a rider). I'm guessing that I have probably set a personal record for painted figures in 2007. Either I need to get a life and cut back a little bit or I'm going to start getting dirty looks from my wife and daughter. I keep telling myself that I can slow down the production line (and I target 60 to 72 points per month). But just when I think that I've got things back in balance, along comes a new line of figures (Frank, you know who I'm talking about) that truly inspires me to paint more, or else a big wargame is coming up and I just have to paint one more unit for the game.

At least my Prussian army is nearly done and I can get on to the task of painting more of the opposition Austrians. It never ends.