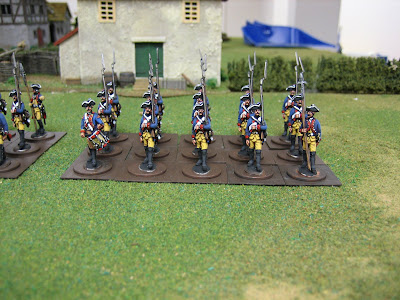 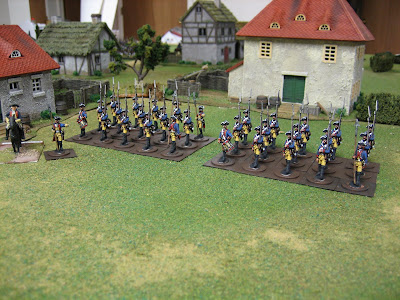 
Here are some pictures of the first 30 Minden Miniatures figures that I painted over the Thanksgiving Holiday weekend. They are painted as IR34 (Prinz Ferdinand), whose inhaber was one of King Frederick's brothers. It is a sort of royal regiment, so like the guards and the Prinz Heinrich fusiliers (IR35), it wears the yellow breeches and waistcoat. I have mounted the figures onto US penney coins to gain a couple of millimeters in height so that they will see eye to eye with my Stadden figures. However, this is not entirely necessary as the visual effect of a 60 figure unit, en masse, tricks the eye into thinking that all of the figures are the same height, when comparing two different brands of figures.

I'm looking forward to finishing this unit over the next week or so. I thought that I would have them completed this week, but the need for some more cavalry for the next game, on December 1, 2007, compelled me to stop painting infantry and switch temporarily to heavy cavalry. I'm also awaiting receipt of the GMB Designs flags that I ordered from Miniature Service Center. I didn't want the Prinz Ferdinand regiment to go into its first battle without its colours.

Minden Miniatures are sculpted by Richard Ansell and owned by Frank Hammond. If you are interested in purchasing some of these little beauties, then please click on the "Kingdom of Leder Hosen" link on the left hand side of this page for more information. Frank currently has Prussian musketeers, fusiliers and grenadiers available, and a review of his blog indicates that the horses, and ergo, the cavalry are looming on the horizon. For those of you who cannot wait for the cavalry, be advised that the RSM95 figures (from Dayton Painting Consortium) will fit splendidly with the Minden figures. I placed an RSM mounted officer in the above picture to show you how compatible these two lines are. But as much as I like the RSM figures, I think that the Minden Miniatures are decidedly better. Hmm, I may have to start a completely new Prussian army at maybe a 1:20 or 1:30 ratio to go along with my big battalions. I really, really, really enjoy painting these figures.

All in all, I am very pleased with the way that these figures turned out and I give Minden Miniatures my highest recommendation. I plan to order a couple more 60 figure battalions to add to my Prussian army in 2008.

I also received two music CDs that I recommend. The first is called "Preussens Gloria" (army music of the 18th and 19th centuries) and the second is called "Preussische Armee-Marsche des 18 Jahrhunders". Both are performed by the same band: Stabsmusikkorps Berlin so the CDs are basically similar. If you only want to order one, then get the first CD as all of the same tunes are on the second CD. So you get more music with Preussens Gloria.
Posted by Der Alte Fritz at 4:49 PM