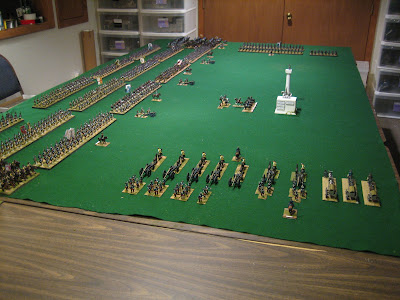 Following two large battles in October (Preisserstadt) and November (Dithersdorf at Rock Con), I thought that it would be a good idea to take all of my Prussians out of their storage boxes and line them up on my wargaming table in order to see how they had fared in the battles. The infantry battalions are lined up in groups of similar styled figures. For example, the first brigade in the front left foreground is my Guards Brigade (von Saldern) of IR6, IR15 and the Heyden Grenadier battalion (19/25). I'm thinking of adding another guard battalion of imaginery langenkarls in red breeches/waistcoat and Prussian blue coats. The next brigade features three battalions of my own Potsdam Miniatures (IR5, IR20 and 5/20 Jung-Billerbeck grenadiers). I intend to add a fourth battalion of IR18 (Prinz von Preussen) with their distinctive rose colored facings. The third brigade features Elite Miniatures and Surens (IR19, IR25 and IR24). The fourth brigade is the Stadden brigade (IR7, IR12 and IR13). Eventually, I will shift the IR24 Surens into this brigade and call it the "Old School Brigade". Finally, at the far end facing the camera, is a demi-brigade of two RSM fusilier battalions (IR35 and IR42). I intend to augment this group with two battalions of Frank Hammond's wonderful Minden Miniatures (IR34 and a unit as yet to be determined). I received a packet of figures from Frank only yesterday - wow, talk about fast customer service. I'm going to have to move these figures up to the top of the painting que.

The Grand Review accomplishes a number of useful things. For starters, you can inspect each battalion and squadron and artillery battery and check for battle damage. In some cases swords have been bent or pin swords have fallen out and need to be replaced. Also, some of the figures are mixed up in the wrong stands, so a sorting out process helps to get all of the lads back into their proper places.

The Grand Review also affords me the opportunity to see what I have, all at once, and then make an assessment of what types of units I need to fill out my army. One clear difficiency was the lack of some artillery crew to man some of the guns. So I will paint up some of the Foundry Prussian artillery figures that I have and add them to the artillery park (shown in the foreground). I will also gradually replace the large French 12 pounders (from Elite Miniatures) and replace them with proper Prussian artillery pieces, recently purchased from Berlin Zinnfiguren this year. The Elite 12-pounders will henceforth be used to depict Brummers, those heavy 12-pound fortress guns that Frederick employed with great effect at Leuthen in 1757.


I intend to have four infantry brigades, and each brigade will require two regimental guns per brigade. So I need to add four more battalion pieces. But wait, I've decided to upgrade my battalion pieces to 6-pounders and 7-pound howitzers, from Berlin Zinnfiguren, of course. Afterall, Frederick the Great made a similar decision, adding the howitzers as replacements for the standard 3-pound regimental gun during the course of the Seven Years War.

Preisserstadt made it clear to me that I do not have enough cuirassiers in my Prussian army, given that all the French cavalry regiments seem to be wearing iron. As God is my witness, I will never be out-cuirassed ever, ever again! (smile). I had a few extra Elite Miniatures Prussian cuirassiers lying around the wargame room and so I decided to paint these as the three squardron Garde du Corps Regiment (CR13). These were usually brigaded with the 5-squadron Gensdarmes Regiment (CR10), so an order was duly placed for 60 more cuirassier figures from Crusader Miniatures. That's a lot of horse flesh to paint, but I won't need them until next year's big OSW game in October 2008. The first 15 Garde du Corps are now completed, so I can add a squadron of this unit to the cavalry establishment.

Another change that I would like to make is an upgrade of the brigade command stands. I currently use a mix of Foundry, RSM and Stadden figures for brigade command figures. Some are mounted on rectangular bases, others on 2" diameter round bases. I have decided that I like the round bases better. I can make a little mini-diorama on the base and the round shape instantly differentiates it from any other figure stand and tells the player that it is his command stand. So going forward, all infantry brigade commanders will be the Stadden Prussian mounted officer on the H1 or H2 horse. The other figures will go back to their old armies in my other collections.

Finally, the best reason of all for having a Grand Review? It looks really cool to see one's whole collection on the tabletop at one time. I have been known to stare at them for an hour or so in the evenings. I go around the table, pick up a stand here and there and give them a closer inspection, etc. It's fun, but it seems to keep me too late in the evenings. It is a hard habit to break.

And last, but not least, a picture of a certain young lady (from the Suren 18th century range) riding side saddle in hunting habit. Some might think that this is the Erbprinzessin of Hesse Seewald, while others wonder if it might in fact be that secret agent extraordinaire, the mysterious Milady de Winter. I'm not telling. 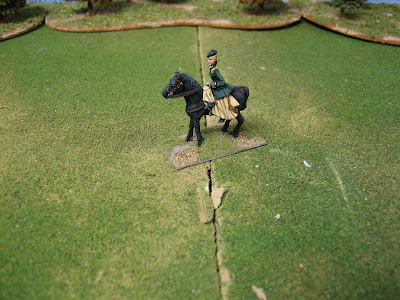