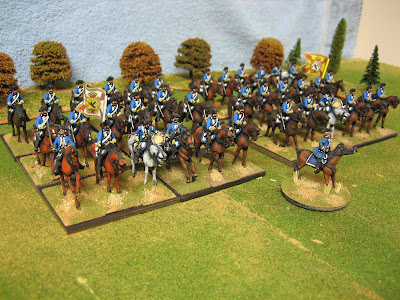 
I've been asked to post some pictures of the Suren Prussian dragoons and the Stadden hussars for the SYW, so without further ado, here are some pictures that I took this evening. The first shot depicts two 18 figure squadrons of DR2 (dragoon regiment no. 2), also known as Jung Krakow. The officer leading the parade is the Prussian mounted officer from the Elite Miniatures range of SYW Prussian infantry. Although the later is a 28mm figure, you can see that the Elite and the Suren are comparable in size. This allows one to add some of the musicians and other figures from one range to the other. 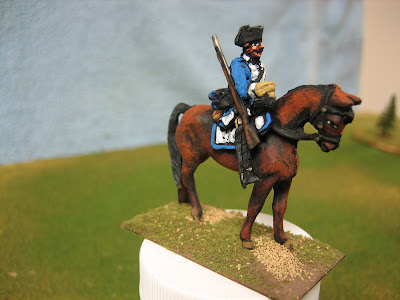 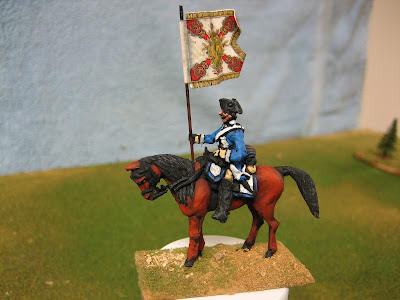 The next two pictures depict the same Suren dragoon, with the top picture showing the Prussian dragoon trooper and the bottom picture showing the same figure converted to the cornet, or standard bearer. The latter figure is holding a GMB Designs standard. The white standard is the liebfahnen, or the inhaber's personal standard. The regimentfahnen has more color: predominantly yellow background with red flames. The musket is probably too long for a carbine, but it can be clipped down to the proper size. Or order the banded musket or carbine from the RSM95 range of figures via The Dayton Painting Consortium. These are nicely detailed firearms that look more up to date on these old school figures from the 1970s.


The next set of photos depict the Stadden (or Tradition, as they are sometimes called) SYW Prussian hussars in fur busby and mirliton. The hussar in the busby is painted as HR2 (hussar regiment no. 2) Zieten Hussars , whose inhaber was the famous Prussian hussar general, Hans Joachim von Zieten. They are sculpted wearing the pelise, or short outer coat, over the red dolman, which we cannot see. On campaign, the pelise was rarely worn, except when the weather was cold. So the typical picture of the pelise draped across one shoulder and flying wildly through the air is nothing more than artistic license. 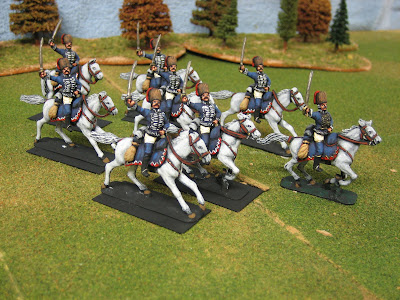 
The next set of pictures depicts the Stadden Prussian hussar wearing the felt mirliton. This one is painted as HR5 von Reusch, better known as The Black Hussars, for obvious reasons. This unit has been known to strike terror into the hearts and minds of our Gallian (French) opponents. They ran roughshod through the rear of the French lines in the 2006 big battalion game of Lunstadt, and more recently at the Rock Con battle of Dithersdorf, a single squadron of dismounted Black Hussars charged into a French howitzer battery and captured all three guns. Accordingly, they have won two battle honors, which elevates them to "Elite" status forever more. Well done lads! May you continue to strike fear in your opponents. 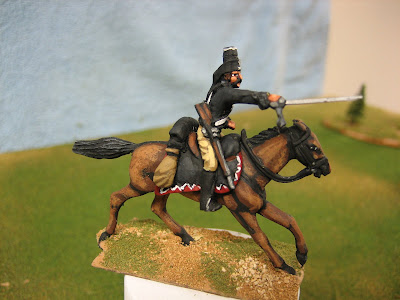 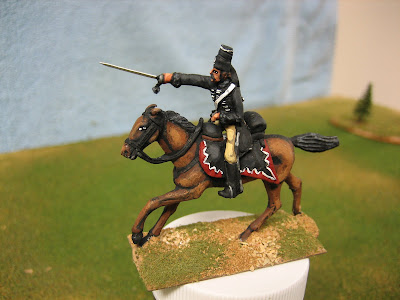 
The hussar in mirliton is a very elegant, well proportioned figure that is one of my all time favorites. The arm is cast straight out to the side, but with a little bit of careful bending, you can point the arm forward in the classic "en pointe" pose. The swords are a bit flimsy, so I cut them off and replace them with pin swords. Simply clip off the sword, file the hilt area flat, then drill a small hole with a pin vise tool for the first part of the operation. Then, take a common sewing pin and smash it flat with a hammer. Clip off the flat head so that your pin sword is the desired length. Now for the important part: take a small file and file away the silver plating on the pin at its base (the part where you intend to glue it into the pin hole). This gives you a bare metal on metal bond when you apply the super glue and makes for a stronger bond. If you don't file away some of the plating, then the bond is not as good and the pin sword may eventually fall out. Sometimes pin swords do fall out, particularly if they've stuck someone really, really good. (I like to paint some red on the tip of a couple of pins and then tell people that it is real blood, he, he, he...). Simply take the old pin, file away the old glue and reglue into the socket, or make a new pin sword. It's very easy to do.
Posted by Der Alte Fritz at 8:31 PM