The Guards Brigade On Review 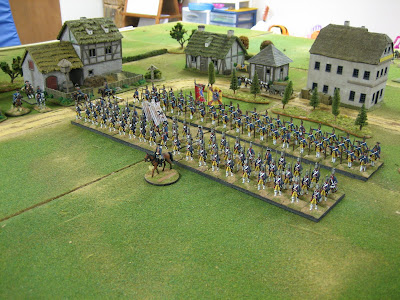 The Brigade of Guards assembles for inspection on the village green. IR15/III (Staddens) in the foreground and IR6 (Surens) in the background. All buildings by Herb Gundt. 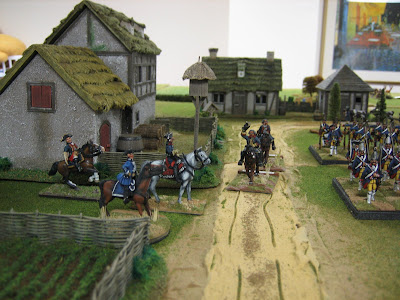 One of my readers had the great idea of featuring each of my Prussian infantry and cavalry brigades over the course of several days. I liked it so much that I thought that I would lead off with King Frederick's grenadier guards of IR6 and the third battalion of IR15. These are the mainstays of my Prussian army and I must confess that I employ them in a rather Napoleonic manner, holding them back like the Old Guard and using the brigade to plug holes in the battle line or deliver the coup de grace.

Nevertheless, they have had their fair share of table top glory over the past couple of years. I recall one battle at the Seven Years War Association Convention, in 2006, where my Stadden IR15/III battalion marched up into the face of the French Gardes Francaises, delivered a first fire at about twelve inches, and blew away half of Les Gardes with their opening volley. It was a grand sight indeed. Then, at this year's SYWA convention, IR6 quick stepped over to the right flank to plug an enormous gap in the line. Der Alte Fritz deftly played his Joker card and employed a fire, pin the enemy and charge move that totally disrupted the French attack on the flank. The first battalion of French grenadiers routed after taking a first fire from IR6 into their flank. They ran right through a supporting regiment of French cavalry which were also put to flight by my guard unit.

Yes, Der Alte Fritz has many fond memories of his guards and their actions. The brigade is under the able command of Major General von Saldern and their garrison posting is in Potsdam with the King. I have painted one prototype of a third battalion of guards. These will eventually become Die Langen Kerls, attired in red breeches, waistcoat and red cloth mitre cap, using the Stadden grenadier in march attack pose. These are, of course, modeled after King Frederick William's Potsdam Giant Grenadiers. However, they will not be silly, gawky looking giants, but rather stalwart grenadiers drafted from the grenadier companies of other Prussian infantry regiments -- good steady Brandenburg and Pommeranian troops. They ought to be ready in time for my next OSW Big Battalion Game in October 2008.

All of this reminds me of a nice little Osprey-style paperback book that I recently received from Berlin Zinnfiguren. It is titled, "Die Langen Kerls, Die Preussische Riesengarde 1675/1713-1806" and is published by Zeughaus Verlag and written by Rolf Fuhrmann. It is nearly a full color booklet, 56 pages long with many detailed pictures of the guards' equipment circa 1713, 1736, 1756 and 1806. Thus one can easily follow the evolution of IR6 up through the Napoleonic period. This is a very handy booklet to add to one's uniform reference library and is higly recommended. You can find out more information by clicking on the link to the Berlin Zinnfiguren store shown on the lefthand side of this page.
Posted by Der Alte Fritz at 11:04 PM