An Oasis In The Desert - Building Terrain 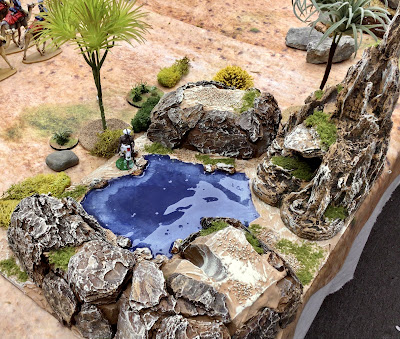 When an army is fighting in an arid climate, such as a desert, the most important thing that it needs is access to water, for obvious reasons. Accordingly, I thought that it would be a good idea to make some watering holes for my 54mm Sudan Project.

The initial idea for a "Blue Lagoon" oasis came from the need to build some kind of a base for the jagged mountain terrain piece that I bought at the local pet supplies store. I didn't want to glue the mountain permanently to a board so that it would be easier to store and transport a relatively flat piece of terrain. I reasoned that I could build a terrain piece and then leave a space on the terrain where the little jagged mountain could be placed. I could also use the model without the mountain, placing palm trees in the empty space if need be.

The two pictures below show off the oasis model with and without the mountain piece.

My first attempt at building a desert watering hole is shown in the picture above. It is constructed from a piece of plastic that I've cut in an irregular pattern rather than leaving it as a rectangle. Rectangular terrain pieces often do not look very realistic, but when you round the corners, it makes a big visual difference. This water hole can be placed atop of my terrain mat. I then add some large rocks, green lichen and a couple of palm trees (made from pieces of artificial plastic flowers that I bought at Michael's Stores). It looks nice, but I wanted something more.

My next idea was to have a water hole in a "lagoon style" of setting. The model would be surrounded by rock so as to have the water "tucked away" into a hidden place within the rock walls. Then I decided that this could also serve as a base for my fish tank mountain piece. Someone pointed out to me that the color of water takes on the appearance of the color of the sky, for the most part. Thus the cloudless blue sky of the desert would likely reflect a blue color to the water hole.

How to build the model

I used a cork place mat (purchased at Target Stores) as my base and glued chunks of 2-inch thick pink foam insulation board for the rocks. The foam was glued to the cork using white Elmer's Glue and allowed to dry overnight. The next step was to use my hot wire knife to shape the pieces, cutting off the corners and the edges of the top pieces. The final step was to attach pieces of bark to the foam, using a grab adhesive made by Loctite. I also use this stage to fill in some of the cracks and openings in the bark areas so that the underlying foam pieces do not show through the rock. Again, allow the bark to cure overnight before going to the next step.

Next, I take some Red Devil Premixed Wallboard Paste (also called Spackle Compound) and mix the color of paint that I want to use for the ground color. By mixing the paint into the paste before applying to the model, rather than painting the model after applying the past, you mitigate the possibility that a chunk of spackle might chip off from use and reveal an area of white. If you mix the paint into the spackle, a chipped off piece of the paste will reveal the color of the paint, rather than white. This also saves time used to paint the white spackle with paint.

While the spackle is still wet, sprinkle some bits of fine railroad ballast (Woodland Scenics) onto the spackle to get more definition to the flat areas of the surface.

Next step: select a highlight color and dry brush the color over the rocks and the ground cover. After the dry brushing is completed, then glue down some bits of course green flock in areas where there is likely to be some grass or other vegetation. Just a little bit of green really makes the appearance of the model POP!

Let the Mod Podge dry overnight. It might take two to four days for the stuff to completely dry. You might even want to add another layer of Mod Podge to your water, but one coating is usually enough. You could also have a trickle of water running into your pond. I didn't do this on my model. You can use hot glue to depict the water. I've seen white string dipped into clear epoxy used by railroad models.

So there you have it. I now have a respectable looking water oasis to use in my desert terrain wargames.