The Desert Column has departed from the water wells of Abu Klea and is moving towards the village of Metemmah on the Nile River. Whilst the Dervishes were soundly defeated the other day, there is no doubt that there will be more to encounter as the column marches towards the Nile. You can read the battle report for my Abu Klea game Here

General Herbert Stewart, the commander of the Desert Column, leaves about a third of his force back at the water wells, where they guard the baggage, the wounded and the artillery. Stewart decided that given the pour performance of the Gatling Guns at Abu Klea, that they will only hinder the speed of the column and not provide any substantial help in a battle. Accordingly, he leaves the artillery with the rear guard. The rear guard are posted on a low rise where their artillery can provide support for Stewart's advancing forces. 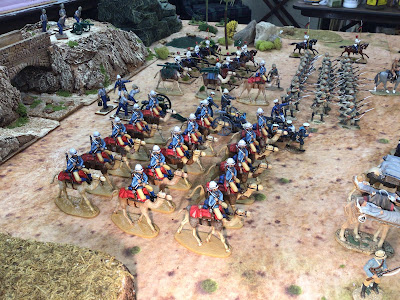 Accordingly, General Stewart has sent his two squadrons of Egyptian Lancers out ahead of the column to stir up any Dervish warriors that might be hiding in the Acacia Trees. Their long lancers are the perfect weapon to use against the wily Dervish who like to hide in the scrub bushes and then jump up and ambush the unsuspecting rider.

The lancers have flushed the Dervish out of the Acacia trees and scrub, clearing the way for the Desert Column to advance.

However, a blocking force of Dervish are spotted on the horizon giving indication that they plan to contest Stewart's advance to the Nile River. The Battle of Abu Kru is about to happen.
As I write this I don't know, either, how the battle will turn out. Will the Desert Column make it the relative safety of the Nile River or will they be annihilated by the Dervish? Will General Stewart survive the battle?Stay tuned with this blog to read the outcome of the battle.

CHECK UP THE WEEKLY UPDATES OF THE SUDAN PROJECT ON PAGE TWO OF THIS BLOG.