The first battalion was the ceremonial battalion with all of the fancy and expensive uniform lace. They appeared in only one SYW battle (Kolin), spending the rest of the war stationed at the royal residence at Potsdam.

Here is a link to the Kronoskaf site for more information on the Guards Regiment. IR15 Prussian Guards

Here are two views of the battalion from the rear ( I have removed two of the stands from the unit so that it would be easier to take a photograph). 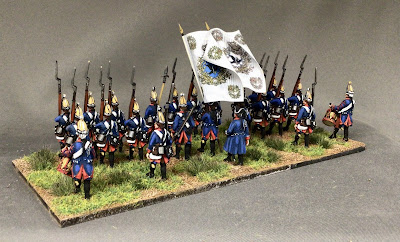 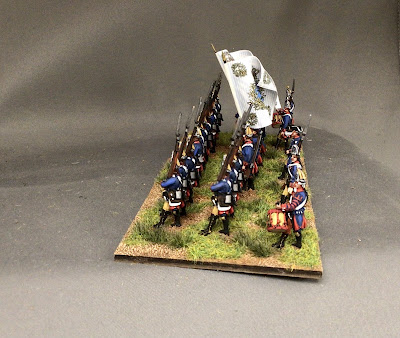 As per my new basing system, the figures are mounted on 3mm thick MDF bases that measure 60mm frontage and 80mm depth. The stands hold either 8 or 9 figures. The officers, NCOs and musicians form a third rank. Flags are from GMB Designs.

Here are pictures of the full battalion with five stands of figures. My recollection is that there are 44 figures in this one battalion compared to my line regiments' strength of 32-34 figures.

Both the Guard musketeers and grenadiers are available from Minden Miniatures as distinct castings (these are not line regiment figures converted with paint). The main distinction between the line and guard units is that the Guards wore an aigulette on their right shoulder.

Here is a link to the Fife and Drum Miniatures web store Prussian figures section of the catalog.

The relevant product codes are: