Kolin at the 2018 SYW Convention

In 2018 I ran my Kolin scenario again at the Seven Years War Convention in South Bend, Indiana. The Austrians prevailed again as their left wing descended the Pohbor Hill and overwhelmed the Prussian refused right flank with their sheer numbers. The contest was somewhat even in the center of the battlefield near Chosenitz, while the Prussians were mopping up the Austrian cavalry near the Oak Wood, on the Austrian right flank. The pictures below tell the story of the battle. Please click once or twice on each picture to enlarge the view. 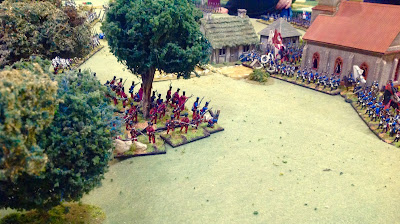 Croats have decided to leg it out of Krechor rather than face the bayonets of Prussian grenadiers.
Posted by Der Alte Fritz at 5:00 AM