They Certainly Have A Lot of Gaul 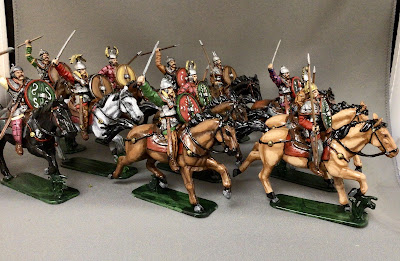 Yesterday I finished the painting of 8 more HaT Gallic Cavalry figures, adding to the 4 figures that I painted about a month ago, thus bringing the  unit up to its designed 12 figure unit of cavalry.

I have 36 more Gauls to paint in order to complete the unit at 48 figures. They will become part of Hannibal's Carthaginian army in Italy. My Carthaginian cavalry contingent will be comprised of Numidian light horsemen and heavier Gallic cavalry. I also have a small contingent of 12 Carthaginian heavy cavalry that will fill out the overall Carthaginian and Allies combat arm.

In many of Hannibal's battles in Italia he had a numerical cavalry advantage over the Roman armies whilst the Romans usually had more foot soldiers. That should create some interesting differences in the armies of the two mortal foes.

The cavalry figures will be based two per stand (90mm frontage and a depth of 90-110mm). I don't want to mess around with having individual figures romping around the table top on movement trays. 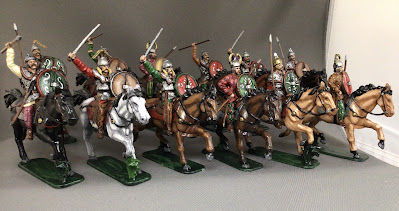 As is the case with most 54mm (1/32 scale) HaT Industrie figures, they are easy to paint and are fun to paint. The Gauls (or Celts) should have an irregular unformed appearance so I try to plan things out so that each figure has its own unique uniform, representing the individualistic nature of the Gallic warriors. Uniform inspiration is found on Pinterest and there seems to be an unending variety of images for Gallic infantry and cavalry. In a future blog post I will elaborate on how I tackle all of the different plaid patterns that go on each figure.

Next Up: another 32-figure Celtic war band .