I finished painting four samples of the HaT Punic Wars Roman and Carthaginian figures over the weekend. I am happy to say that the figures were easy to paint and that this will give the project some legs for a smooth take-off.

The two Roman Hastati wear white tunics, a small breast plate and bronze helmet. To economize, the Romans only wore one leg greave, on the forward left leg. Hmm, interesting. 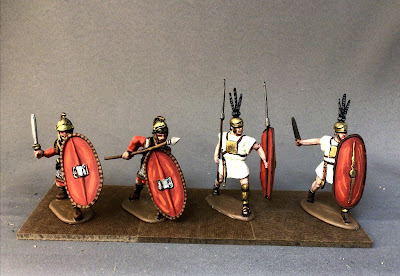 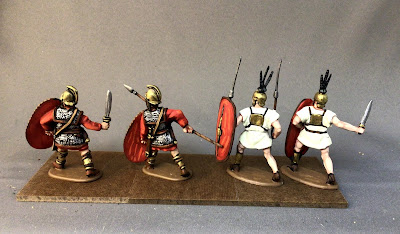 I washed the figures in warm soapy water before applying a coat of Vallejo Grey spray primer. I really like the coverage that the Vallejo primer has and I will be using this brand of primer going forward.

The paints were largely from Reaper Master Paints, P3 and some black "craft paint", the latter purchased at Michaels Stores. I gave the skin an undercoating of red-brown and then used the Reaper Tan Skin triad (I only use the shade and the main color, usually not using the highlight color in the triad). The Roman tunics used the P3 paints Menoth White triad, although I discovered that I was out of the Menoth White highlight color, which ticked me off to no end seeing that I had just purchased a dozen P3 paints via the internet. I forgot to order the white highlight, which has more of a creamy white color to it.

Last evening I primed ten more Roman Hastati figures and ten more Carthaginian figures. I started on the Romans this morning and should have these done within a day, assuming that I get allocated some painting time from Herself. I try to not overdo it with painting details or extensive shading and highlighting because the purpose is to get these painted fast and onto the table.

I have made an important decision regarding the size of my infantry units. They will all be 16 figures based in two ranks. This is because each box of HaT infantry figures has 16 soldiers in it so it is easy to have one box equal to one infantry unit. The figures take up a frontage of 14-inches, in two ranks. So while the number of figures in each unit is smaller than what I would typically use, say 24 to 36 figures, the eye is fooled by the large size of the figures (54mm) and the big bases, both of which make the unit look quite large.

I can do a little bit of tweaking on my rules ("Age of Rome") so that the units don't get slaughtered in melee so quickly, compared to my horse and musket period rules. Age of Rome rules use the same mechanics as my SYW and AWI one page rules.

I set up a sample table with some mock units, unpainted at this stage, to give me an idea of how they will look. I experimented with a three rank system, but I didn't like the way it looked. I'm not going for historical accuracy (whatever that is), but rather going by what looks good.

I received one of the elephants I ordered yesterday and another one is on its way. I also have five boxes of various Carthaginian/Spanish allies on order, scheduled for arrival later this week. These will include two boxes of African/Libyan heavy infantry, two boxes of Spanish allies infantry, and one box of Carthaginian light infantry. Including the Veterans unit that I am currently painting, this gives me six infantry units and two elephants to start my Carthaginian army. After these are painted, then I will order some more Romans and paint an equal number of them vis a vis the Carthaginian army. After that, I will tackle the cavalry for both sides: one light and one regular/heavy cavalry unit of 16 figures. And then after that, add some more infantry units for both sides.

By the way, the buildings shown in these pictures were made by Herb Gundt many, many years ago. Even though they were made for 28mm figures, they look fine as a backdrop for any games that I play with these armies. After all, the armies are going to be fighting in the open and not in the built up areas.