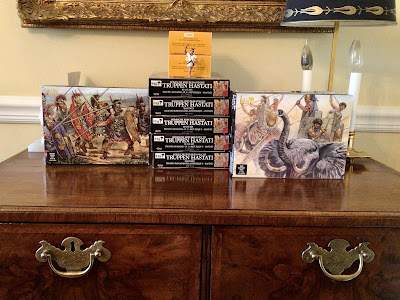 Today was a good day for my Punic Wars Project, having received a huge stash of HaT plastic Republican Romans from a fellow Wargames (thanks Jeff 😀) and a couple of HaT metal Baleric Slingers from an eBay seller. I wish that I could find more of the latter.

Today’s treasure haul included one box of Roman Triarii, five boxes of Hastati, and three boxes of Carthaginian elephants. These have arrived just in time to make it onto the painting table towards the end of the week. The Triarii and Elephants are particularly hard to find in the market due largely to HaT’s strange business model. It appears that HaT places an order for stock from its supplier in China and then sends the stock out to its distributors. So far so good. But when the distributors run out of stock, HaT doesn’t order replacement stock with any sense of urgency.

On the HaT website they have a forum and the company asks its customers or followers to vote on which production items that the company should reorder. Let me say this again, when HaT runs out of stock they do not replenish stock, presumably until they get enough interest to run the injection moulds again. I cannot think of a more anti-customer service business model than this.

The end result is that sets such as the Triarii, Elephants and assorted Roman and Carthaginian cavalry are hard to come by. So thank you Jeff for helping me to build out my Punic Wars armies.

The Baleric Slingers are another HaT oddity. They cast the figures in metal and sell them as painted figures, but not in enough quantities that anyone can purchase in any quantity. The HaT website indicates that the Baleric Slingers will be a future addition to its 1/32 scale (54mm) plastic range, but they are not in production. It would seem that if the metal version can be made and cast that it shouldn’t be too difficult to make the moulds for the plastic version.

Fortunately I have been able to acquire most of the HaT sets that I need to build out my Republican Roman and Carthaginian armies. I’m good with elephants, having five nellies on hand. If anyone has any spare Triarii, Baleric Slingers, Roman heavy cavalry, Spanish cavalry, or Carthaginian Veterans and Heavy Cavalry, then get in touch with me and I will be happy to take them off your hands.