I finished painting the first 16 figure unit of Republican Roman Hastati for my 2nd Punic Wars Project. The HaT figures paint rather fast and they are fun to paint, so I would imagine that new units should be rolling off the assembly line at a rapid pace going forward. I can easily paint 32 figures per week, which equates to two boxes of figures. I rather imagine that I can knock out a few more figures per week, perhaps 48?

The Roman figures are standing on 40mm rounds from Litko bases. I will probably order some 8-figure movement stands (two ranks of 4 figures) from Litko. The 10 and 6 figure stands are "stand ins" so that I can see how they will look when they are formed up. 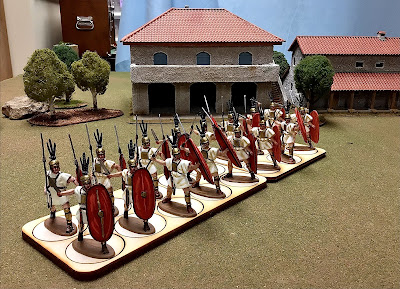 The picture below provides a mockup of how the infantry units might look when they are deployed on the table. I am using 16 figures per unit, in two ranks, having a frontage of 14-inches.

The two buildings and the temple were made by Herb Gundt for use with 28mm figures, however, I think that they make for a nice backdrop for the photos that I am taking. I don't expect to have many scenarios where the armies are fighting in or for a village, so the size or scale of the building doesn't really matter.
Today was a primer day. I spray primed 32 Spanish and 6 Carthaginian Veterans. So now I have a good stock of ready to paint figures on hand.
The two Spanish allies' units are next on the painting table.
Posted by Der Alte Fritz at 9:32 PM