Today is the 260th anniversary of the Battle of Minden, fought on August 1, 1759. As readers of this blog will know, this week is leading up to our table top refight of the battle this coming Saturday August 3, 2019. The Minden Miniatures SYW figure range is also named after the battle, courtesy of Frank Hammond, the original owner of the figure range.

The four Horse Regiments were considered to be heavy battlefield cavalry. Next in order were the four Dragoon Guards regiments which were formerly Horse Regiments, but were downgraded in name to Dragoon Guards for economic reasons (i.e. they weren't paid as much as their Horse counterparts). Finally, there were the regular Dragoon Regiments, some of which were very good, such as the 2nd Regiment (The Greys ), while other dragoon regiments were only fit for service in the homeland.

For your reference, Minden Miniatures sells a command pack (officer, standard bearer and trumpeter) and a pack of troopers. Both packs have three figures including the horses.


Someone asked me how the Minden figures compare to the Elite Miniatures British cavalry that I am using in our Minden game this weekend. As shown below, the Elite figures are substantially larger than the Minden figures. My Royal Horse Guards regiment has two squadrons of Elite Miniatures and one squadron of Minden Miniatures. I put the Mindens on a wood base to elevate their height to approximately the same as the Elite figures. I won't mix the two figures into a squadron, but the pictures give you an indication of how the two figure ranges compare. 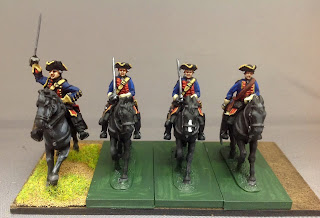 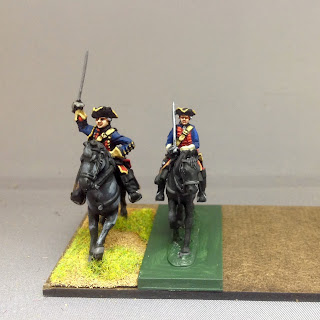 I'm going Old School on the Royal Horse Guards bases for the Minden figures, using just a plain base painted green. Or maybe I will terrain and grass them now that I'm reminded that the Elite figures are tarted up with nicer looking terrained bases.

The Minden Blues will be used in my B.A.R (Battalions dans l'Ancien Regime) rules British army wherein each figure is separate and formed into squadrons of 12 figures, four per stand on three stands, and then placed on magnetized movement trays.

I like The Blues so much that I will paint another unit of them for my regular, more conventional, Minden army of British - two figures per stand on a 2-inch square base.